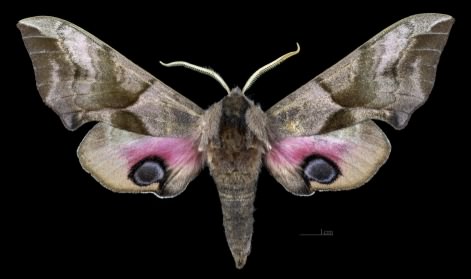 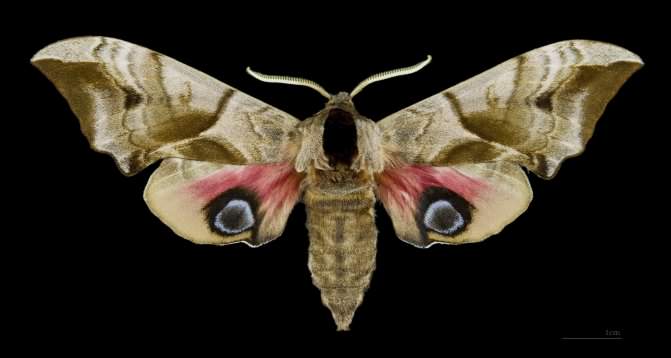 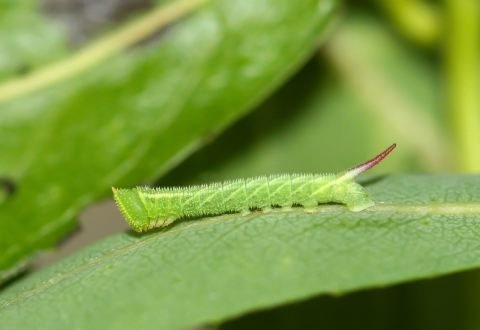 The Eyed Hawk–moth, is a large moth with a wingspan of 70–80mm (2.7–3.2in) but can reach 100mm (4in), they are sexually dimorphic with the females being larger than the males.  It is an overall silvery light brown with two distinct darker brown bands to the forewings, the outer bands being more splotched and larger.  The hind wings are pink graduating to a much lighter pinkish–brown towards the rear with a light brown edging, each wing having a large black stigma with a blue–purple ring.  At rest the hindwings are covered by the forewings so the stigma (eyespots) are not seen, but when it feels threatened the eye–spots are suddenly revealed startling the potential predator, giving the moth a chance to escape.

It is a common night flying Hawkmoth seen from May to August in the UK in woodland and suburban areas but scarce in the north.  It is also a common species in Europe.  After mating the female lays small groups of oval light green pearlescent eggs on the larva food plants of various Willow and Crab Apple species.  Hatching in 10–15 days the caterpillars which grow to 70–75mm (2.75–3in) are a light green with feint white lines and seven diagonal white lines with a small purple spiracles which make them similar to the Poplar Hawk–moth – Laothoe populih, but these have a more pronounced white grainy appearance with more and larger purple spots.  In both species the last diagonal white stripe terminates in tail spike or horn, which for the Eyed Hawk–moth is dark red.  They overwinter as an underground pupae emerging the following year in May or June.