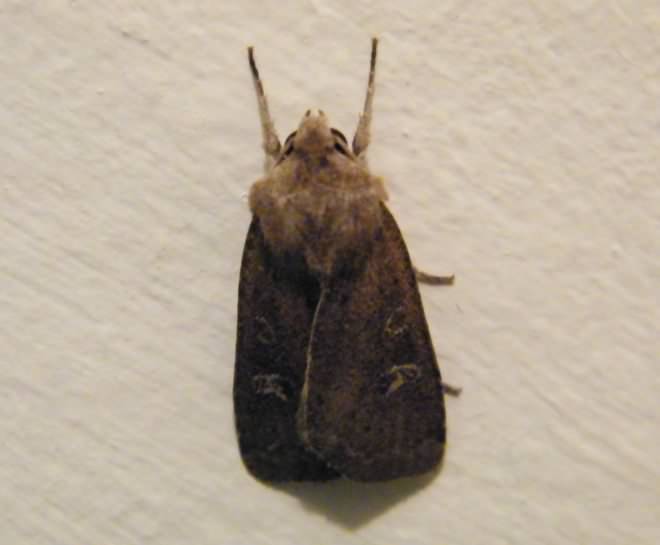 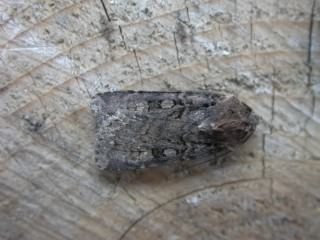 The Garden Dart is a drab variable moth found in the UK, Europe, Africa, North America and parts of Asia but usually localised.  Generally dark brown it can range from Grey to Black.  Identified by a large pale curved stigma on the forewings, the hindwings are pale with a grey fringe.  They have a wingspan of 30–42mm (1.2–1.7in) and can be seen flying at night from July to August.  Like most night flying moths it is attracted to light, making it readily susceptible to light traps.

It is found in woodland edges, grassy areas, waste ground, farmland and suburban areas visiting various plants.  With a large decline in populations it is a species of conservation concern under the UK Biodiversity Action Plan.  Over wintering as an egg the resultant larvae are green or brown with two white stripes down each side, polyphagous, feeding on a range of plants including various Clovers, Grasses, Docks and Plantains.

The Garden Dart is listed in the UK Biodiversity Action Plan listed species for research purposes as it has undergone a marked decline in the last few years from many factors, including habitat change, pollution and the use of pesticides.

The Garden Dart is part of the Noctuoidea superfamily which now comprises just over 11,000 species after reorganisation of the some 20,000 species that were originally in the group.  Noctuidae are commonly known as Owlet moths, there are however only five Owlet moth species grouped in the Mesogona genus.