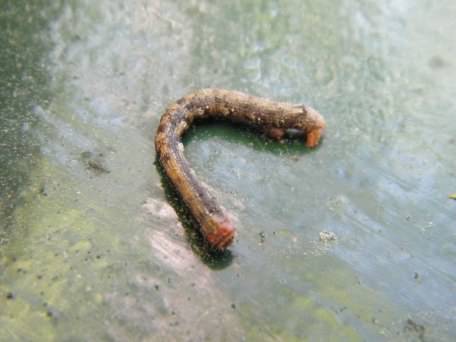 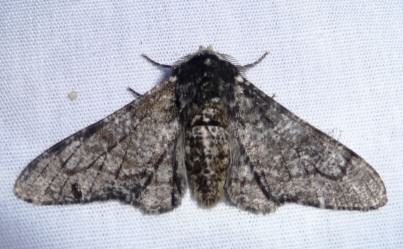 A night flying moth of temperate regions found from North America through the UK and Europe to China.  Wingspan of 45–62mm (1.8–2.5in) with a chunky shortened body, an overall greyish black and white mottled colouration, a black wavy line to the rear of the wings.  The Peppered moth is a temperate species of night–flying moth.  It is an often quoted example of population genetics and natural selection with colour forms ranging from very pale with almost no speckling to near fully black with a light sprinkling of white or grey.  Cited as an example of evolutionary genetics in action, the Peppered moth prior to the industrial revolution period was a lighter colouration.  As the period progresses and pollution blackened the environment the Peppered moth darkened to match is surroundings, mainly by predation of lighter coloured moths being more easily seen against the now darker background.  As environmental standards have improved, the moth is again becoming a lighter colour form.

In the UK the Peppered moth has only one generation a year, whilst in America it can have two generations.  Caterpillars feed on a range plants and trees and being twig mimics varying in colour from green to a mottled brown with small protuberances or warty growths, they can be quite hard to spot.   Widespread throughout most of the British Isles and fairly common found in woodland, hedgerows, parks and gardens, even in urban areas, it is not regarded as under threat.  Its usual flight period is from May to August with males flying for several nights searching for the pheromone trails of females who only fly for one night.