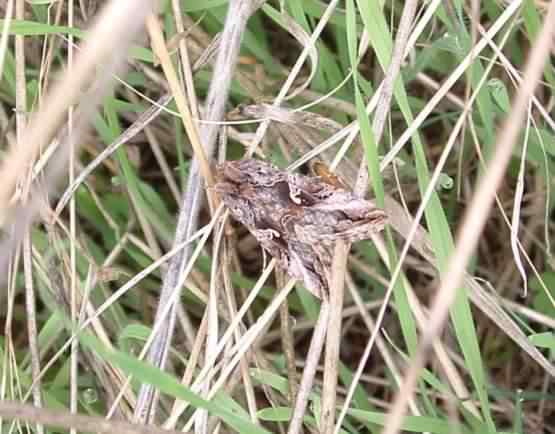 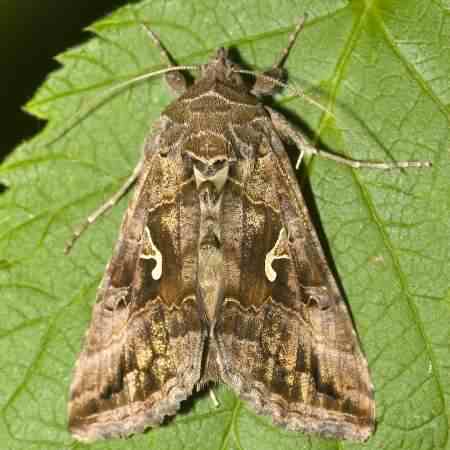 The Silver Y is a migratory moth where it common name relates to the silvery Y–shaped mark on each of its forewings.  It is a medium–sized moth with a wingspan of 30–45mm (1.2–1.8in) found in a wide variety of habitats, particularly open areas and gardens visiting flowers to take nectar  The intricately patterned wings are various shades of brown and grey and are thought to provide excellent camouflage.  In the centre of each forewing there is a silver–coloured mark shaped like a letter Y or a Greek letter Gamma, with several different forms of varying colours depending on the climate in which the larvae grow.

The species is widespread across the UK, Europe, parts of Asia and is resident in the south of its range with the adults flying almost throughout the year.  In the spring a part of the population migrate north reaching as far as Iceland, Greenland, and Finland with some years experiencing quite large influxes.  In the UK adults will be seen in large numbers from May until late autumn, some individuals may migrate south to winter around the Mediterranean.

It is a polyphagous defoliator of many low growing cultivated plants.  2–3 generations are seen in a year with a possible fourth in good conditions, whitish eggs, hemispherical in shape with deep ribbing, are laid individually on the lower surfaces of leaves, hatching in 3–4 days.  The larvae, are usually green but can vary to nearly black, with whitish markings are about 30mm (1.2in) long, have three pairs of prolegs and feed on a wide variety of low–growing plants including crops such as the Garden Pea – Pisum sativum, Sugar Beet – Beta vulgaris and Cabbage – Brassica oleracea.  They are often considered to be a pest.  Pupa is green at first, gradually darkening to black.  The adults have a lifespan of between three to nineteen days and can bee seen from spring to late autumn, by day as well as at night.  The Silver Y moth is listed as an exotic organism of high invasive risk to the United States (USDA–APHIS 2008).

The Silver Y is part of the Noctuoidea superfamily which now comprises just over 11,000 species after reorganisation of the some 20,000 species that were originally in the group.  Noctuidae are commonly known as Owlet moths, there are however only five Owlet moth species grouped in the Mesogona genus.