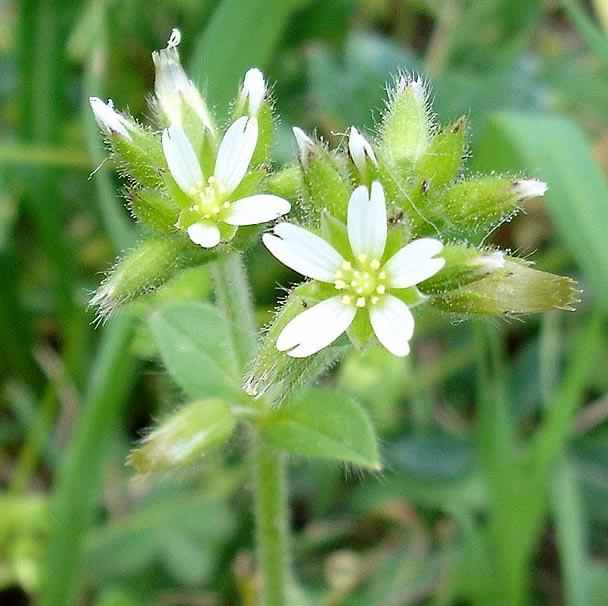 A small very hairy usually sticky, annual species of mouse–ear (Chickweed) growing to 5–40cm (2–15in) tall, which has small compact white flowers 8mm (0.3in) of five petals that are deeply indented making them appear to have ten petals, usually appearing February to May in clusters at the top of the stems, individual or small clusters of flowers may also develop from the axils of the upper leaves.  Each flower also has five green lanceolate sepals, ten stamens, and a pistil with five styles.

Native to Europe but found almost world–wide, very common in a wide variety of moist and sunny bare–ground habitats, hillsides, grasslands, roadsides, pastures, disturbed places.  A mat–forming branched winterannualwith fuzzy, opposite leaves, elliptical to ovate 12–25mm (0.5–1in) long with a entire margin, that resemble a mouse's ears deriving its common name.  Both surfaces of each leaf are covered with hairs and may have a sticky texture from minute glandular secretions.  The stems are also hairy with white flowers arranged in clusters at the end of the stems, reproduces by seed fruiting to an erect cylindrical capsule.  C. glomeratum spreads by re–seeding itself and often forms dense mats in the right conditions, the seeds are persistent in the seed bank.  The nectar and pollen of C. glomeratum attract small bees, flies and some moth species.