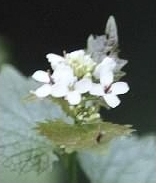 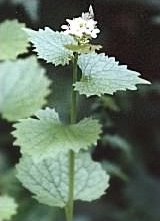 A biennial plant, seedlings emerge February to March forming a basal rosette (sometimes confused with many other plants) which generate flower stalks in their second year dying off after setting seed.  Basal leaves (2–4in across) are dark green and kidney shaped having scalloped edges.  alternate stem–leaves 3–8cm across (1–3in), are sharply toothed and triangular in shape, each leaf getting smaller towards the top of the stem.  The leaves produce a distinct garlic odour when crushed.  Each plant usually produces a single, unbranched flower stalk in April and May, but some robust plants have been seen with up to twelve flowering stalks.

Flowering plants average 0.7–1m in height, but tiny 5cm tall flowering specimens have been observed.  The mustard–like flowers consist of four white petals that narrow abruptly at the base with six (two short and four long) stamens.  The flowers are 6–7mm in diameter with 3–6mm long petals.  Will set seed even if pollinators are not present.  Fruits are linear, 2.5–6cm long and 2mm wide.  The fruit is held erect on short (5mm), stout, and widely divergent pedicels.  Fruit ripen between mid–June and late September.  A single plant produces 10–400 fruits (the average is 22).  Since each fruit contains an average of 16 seeds, a single plant produces 200–8,000 seeds.  The seeds are black, cylindrical (3mm x 1mm) and grooved.  The seeds lay dormant for at least one year before germinating in the spring.

An invasive plant of forest areas and margins, rapidly spreading displacing native plants becoming difficult to control.  The name "Alliaria" refers to the garlic small given off by crushed leaves, and European common names refer to its use as a potherb.  Native to Northern Western Europe to Czechoslovakia in the east and Italy in the south, growing in disturbed forest areas, hedgerows, roadsides, streams, byways and urban areas, preferring partial shade on most types of soil.  An invasive plant in North America, India, Sri Lanka, New Zealand, and North Africa.

FBCP do not advise or recommend that Garlic Mustard – Alliaria petiolata is eaten or used as an herbal remedy.   Rarely used now, as an antiseptic, bronchial conditions wormer ulcers and cuts.  Apparently good in salads.