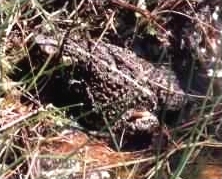 Distributed throughout Europe, but extremely local and endangered in the United Kingdom.  Only found in very few sites in Southern and Eastern England, Southern Scotland and South Western Ireland.  Found on sandy heathland where it breeds in shallow pools.  Flattened body shape with bright yellow stripe down the centre of its back.

They gather together to spawn during March to May laying approximately 1000 eggs in strings, often after heavy rain, most active at night with the males being very vocal.  hibernates over winter in deep holes.  Eats small animals.  Grows to between 6–8cm (2.3–3.2in), adult toads reputedly smell of Garlic.