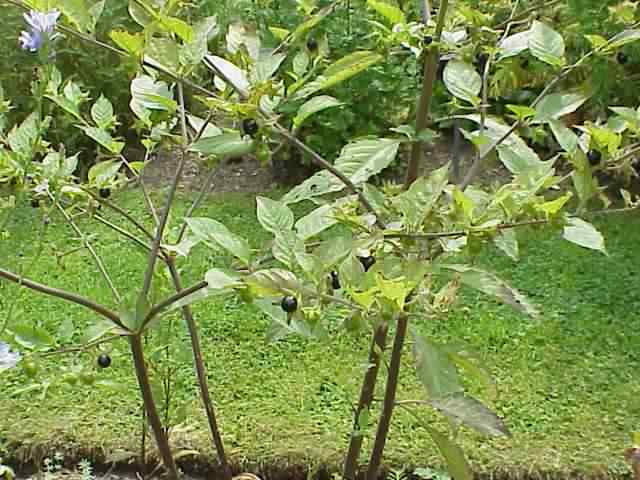 Photo ©2007 Kurt Stuber
Click any photo for a larger image 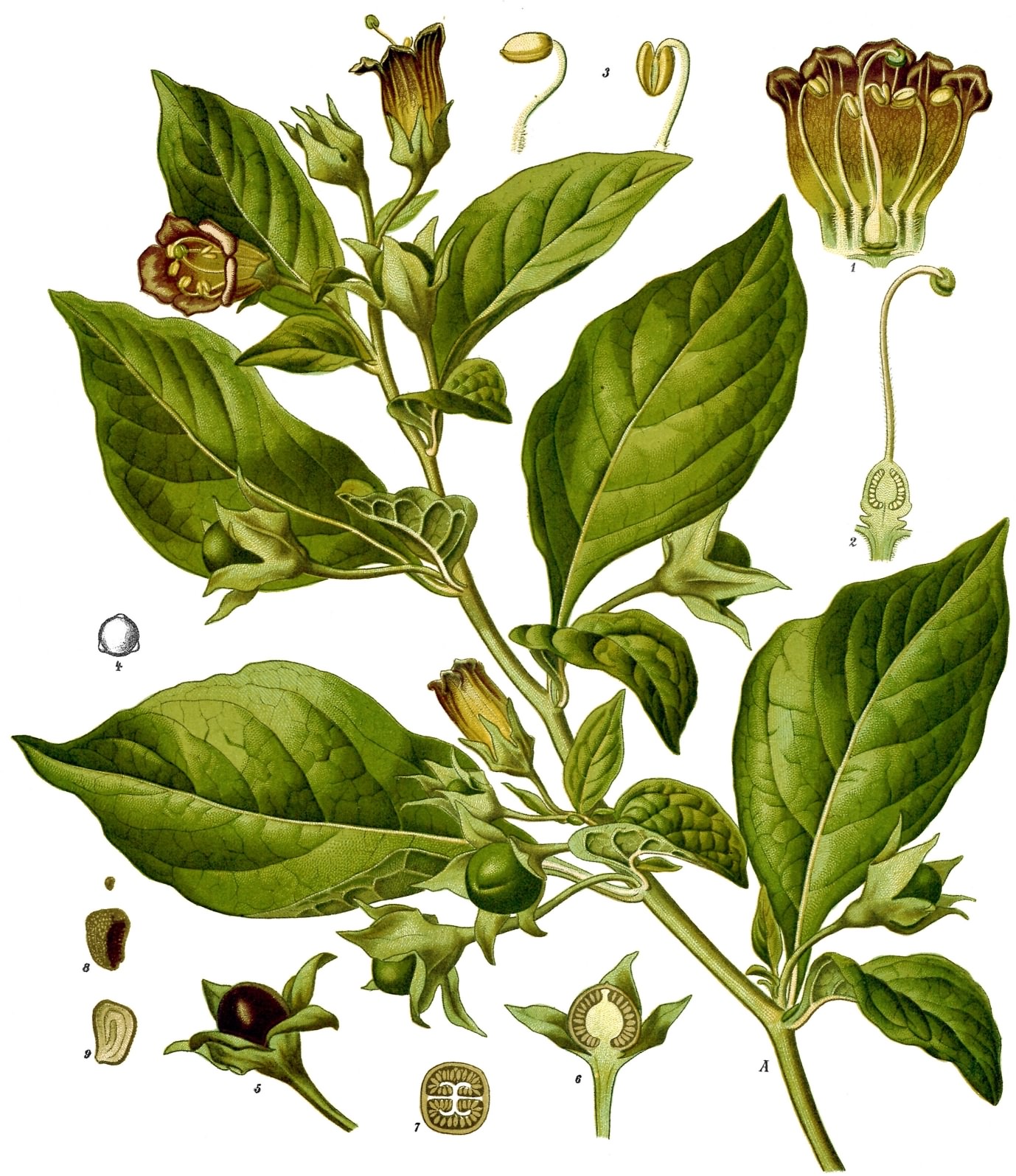 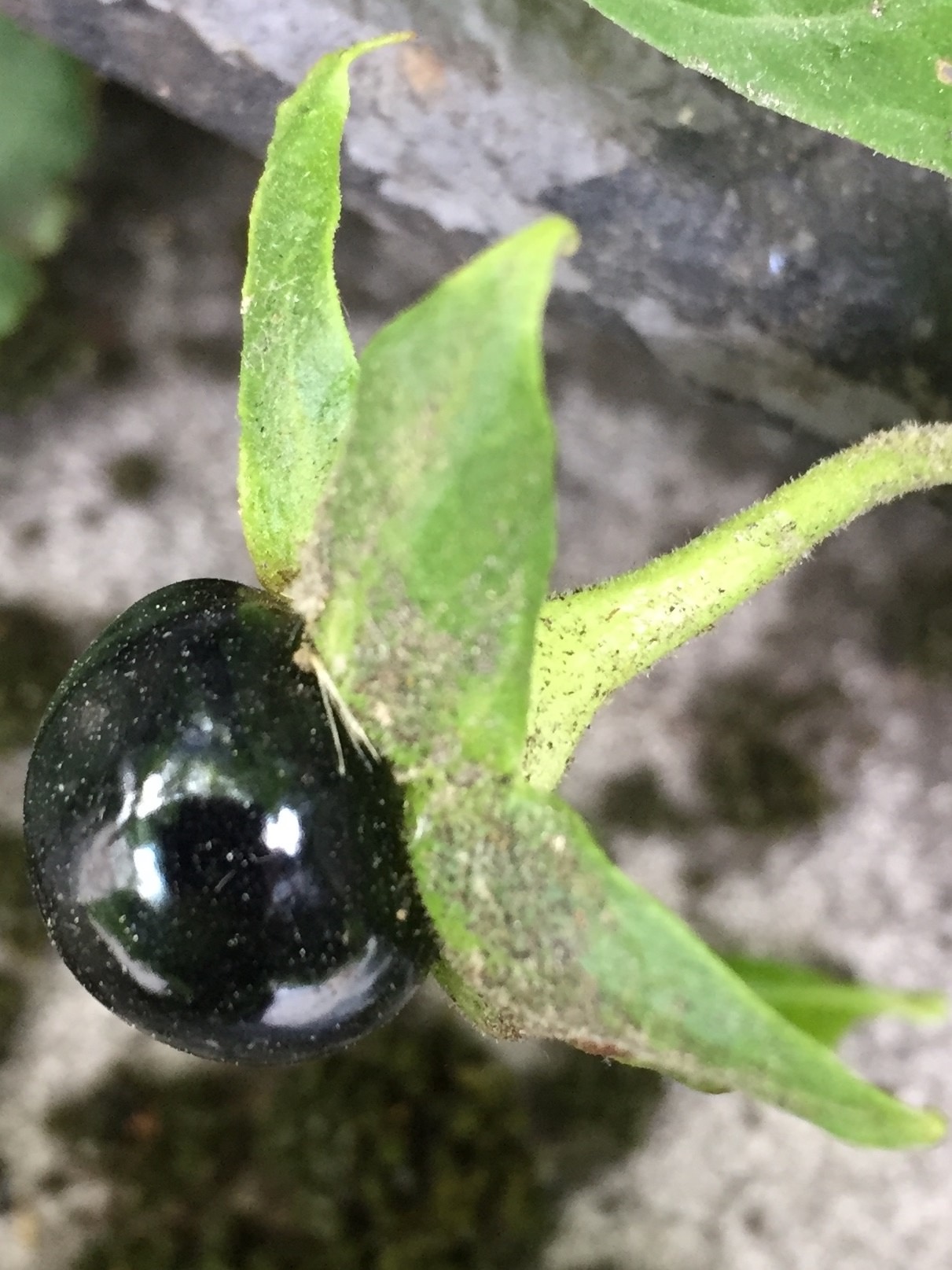 This plant is highly poisonous.

Deadly Nightshade is a perennial An herbaceous plant native to Europe, North Africa and Western Asia, in the Solanaceae family of flowering plants, sometimes referred to as the Nightshade family.  This family of plants also includes Jimson weed, Tobacco, Mandrake, Potato, Wolfberry and Capsicum.  All parts of the plant, not just the berries are incredibly toxic if eaten, containing alkaloids which can cause delirium and hallucinations.  It has branched stems which will grow from 60cm–1.5m (2-5ft) tall from a thick fleshy root.  Dark Green leaves are large ovate 18cm (7in) long.

Solitary bell–shaped flowers appearing in June and July are 2.5cm (1in) long with five blunt points and are a dull purple with green tinges, they form in the axils of the leaves, and continue blooming until early September.  They develop to a green glossy berry ripening to dark purple or black about 1cm (0.39in) in diameter, these are eaten by wildlife with the seeds dispersed in their droppings despite their toxicity.  There is a pale yellow flowering form called Atropa belladonna var. lutea with pale yellow fruit.  Deadly Nightshade can be confused with Bittersweet – Solanum dulcamara, possibly because of its common name of Woody Nightshade.

FBCP do not advise or recommend that Deadly Nightshade – Atropa belladonna is eaten or used as an herbal remedy.   It has a long historical of use as a medicine, cosmetic, poison and anesthetic.  The drug Atropine is derived from Deadly Nightshade.  The common name Belladonna originates from its historical use of drops prepared from the plant which were then used to dilate women's pupils, it was also believed that witches used Belladonna with other hallucinatory ingredients in anointment they applied to help them fly to gatherings with other witches, now regarded as preparations to encourage hallucinatory dreaming.  Belladonna is one of the more toxic plants found in this country, with all parts of the plant contain Tropane alkaloids.  The berries pose the greatest danger to children because they look attractive and have a sweet taste.  Allegedly two to five berries eaten by children and ten to twenty berries by adults can be lethal.  The root of the plant is generally the most toxic part, though this can vary from one specimen to another.  Ingestion of a single leaf of the plant can be fatal to an adult.

As every part of the plant is extremely poisonous, neither leaves, berries, or root should be handled whilst working if there are any cuts or abrasions on the hands.  The symptoms of Deadly Nightshade poisoning include dilated pupils, photo sensitivity, blurred vision, tachycardia, loss of balance, headache, rash, flushing, dry mouth and throat, slurred speech, urinary retention, constipation, confusion, hallucinations, delirium, and convulsions.  Rabbits, sheep, cattle, goats and swine eat the leaves with impunity, and birds often eat the seeds without any apparent effect, but it is toxic to many domestic animals, causing narcosis and paralysis.  According to old legends, the plant belongs to the devil who goes about trimming and tending it in his leisure, and can only be diverted from its care on one night in the year, that is on Walpurgis (30th April or 1st May), when he is preparing for the witches Sabbath.