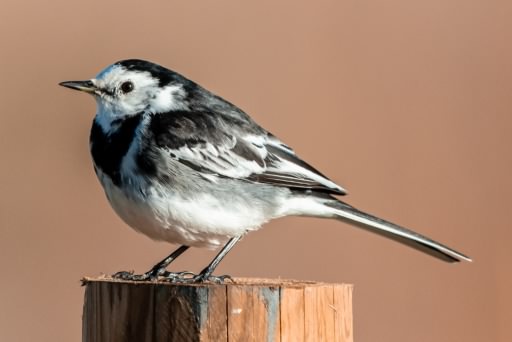 Photo ©2020 Colin Varndell
Click any photo for a larger image 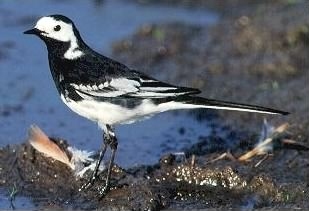 Familiar and common bird found throughout the country in towns, cities, grassland, farmland, often by water.  Reasonably tame and a common resident in many areas.  its name comes from its black and white colouration (pied) and its flicking tail movement.  Bounding flight showing two wing bars with loud "chissick" call, song is a rambling lively warble.  Black throat, head and back with white eye flashes from forehead to cheeks.  White underside with intermediate colour between underside and neck.  Female has grey back, male black, juveniles have their black portion replaced with grey.  The White Wagtail subspecies has a grey back and is a visitor during spring and autumn migration.

Distribution ranges over the whole of Europe to Asia and Africa.  Length 18–21cm (7–8in).  Nests during April to May, in holes in walls, between rocks, using grass, roots & moss, lining it with feathers and hair.  Lays 5–6 whitish eggs marked with dark spots and streaks.  Young hatch in 12–14 days.  Feeds on insects, larvae, worms and spiders sometimes quite close to man in grassed areas roads and roofs, by either catching in flight, picking from the ground or "run–picking" making short darting moves after its prey.  Congregates in the autumn to migrate during September - November.