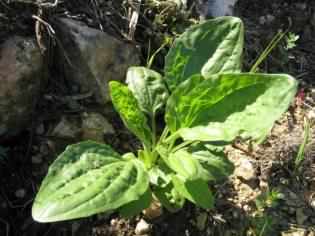 Persistent native herbaceous perennial of disturbed grassy places and lawns, widespread and common throughout the country, growing to a height of 10cm (4in), it is a plant native to most of Eurasia and widely naturalised elsewhere in the world.  Broad oval leaves to 5–25cm (2–10in) long and 4–9cm (1.5–3.5in) wide having three to nine veins, basal leaves form a rosette 15–30cm (6–12in) in diameter growing outwards and upwards.  Small green/brown wind pollinated flowers with purple stamens as a dense spike 5–15cm long (2–6in) on stalks growing to 10–40cm (4–16in) from the centre of the rosette appear May to October.

The plant primarily spreads by wind distribution of the seeds helped by the long, narrow spikes which rise well above the foliage.  It is renown for its ability to colonize compacted and disturbed soils, and to survive repeated trampling.  The common name is reputed to come from a mature leaves resemblance to the of the points of a Broad Leaf.  "Plantago" is derived from a Latin word meaning "sole of the foot".

FBCP do not advise or recommend that Broad Leaf Plantain – Plantago major is eaten or used as an herbal remedy.   As a common weed it has been used as an herbal remedy in many countries as a poultice can be made of the leaves to help with healing in wounds and prevent infection.  It contains pain reducing and anti–microbial agents, and a tea made from the leaves can be drunk to treat diarrhoea.  It is said to be highly nutritious high in calcium and vitamins A, C, and K.  It can be eaten raw or be boiled in stews.