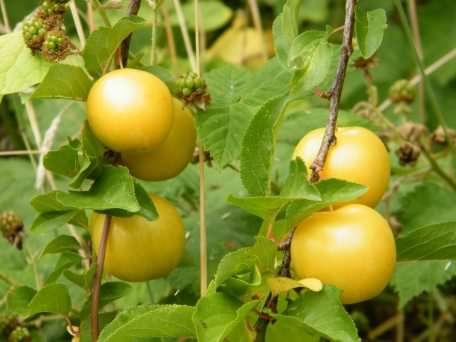 Greengages are cultivars of the common plum reputed to have been bred in France and imported to the UK by Sir William Gage in 1724, from where they get their name.  They can be found in the UK, western and central Europe as a small tree or bush growing to 3–3.6m (10–12ft) flowering March and with fruit from late June to August depending on the cultivar of which there are over 20 forms and are used for eating, jams, and compotes.

They are an almost spherical smooth skinned plum with a pale green flesh and a reputation of being the best eating plums - "nectar of the gods". At 2–4cm in diameter they are larger than a Mirabelle plum, their skin can vary from pale green to a pale red–purple in some cultivars where they have been crossed with other plum species.

They are susceptible to frost and grow well in hotter climates or trained up south facing walls, ours is in a south facing position.  They are a favourite food of wasps and the Codling moth.