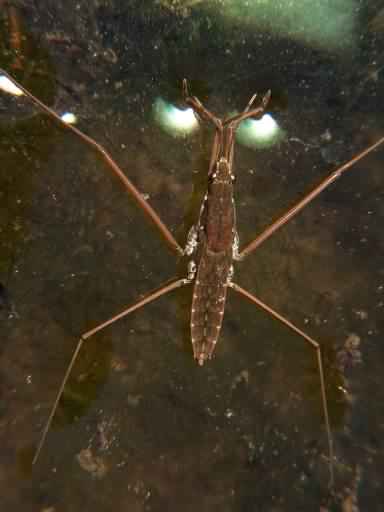 Most of the Gerridae family are are bugs of calmer freshwater bodies, with probably as many colloquial names as there are known species in the group.  Gerridae are found almost world wide in the UK, Europe through to Asia, the American continent, S. Africa, Australia, but not as yet in New Zealand waters.  They are aquatic predators and feed on invertebrates, mainly spiders and insects, and are preyed upon mainly by birds and some fish.  The body is covered with hydrophobic micro–hairs, these hairs repel water allowing the bug to move about on the water's surface, the meniscus, caused by surface tension in the water.  Elongated legs and body allow the Pond Skater to spread its weight over a larger surface area.  Over 1700 Gerridae species have been identified with a small percentage of around 10% being marine species.  Specific identification of Pond Skater species requires microscopic examination of the animal so this species description relates to the general form of a Pond Skater.

They are usually a long narrow bug with the thorax ranging from 1.6mm–36mm (0.06–1.5in) long, some with shorter or rounder bodies.  The pronotum is covered with water repelling micro–hairs, the two antennae is comprised of four segments with stiff bristles on segment three.  Identification of the antennae characteristics can further help in identifying the species but generally segment one (closest to the head) is the longest.  As true bugs they have six legs, the shortest front legs have adapted claws and are attached close to the front.  The second (longer) and third (longest) pairs of legs are attached closer to the rear of the animal and are used for propulsion and steering.  Some water striders have wings present on the dorsal side of their thorax.  Gerridae prefer an environment abundant with insects or zooplankton containing rocks or plants to lay their eggs on.  The newly hatched young go through five instar stages of nymphal forms, and then an adult stage.