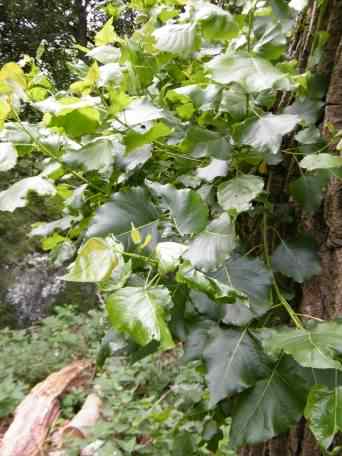 Large tree growing to 30m (98ft), with a trunk up to 2m (6.5ft) in diameter, often growing close to water.  Fissured bark that looks black from a distance (giving the tree its name) is a dark grey–brown.  Male trees produce dark red catkins known as "Devils Fingers" in the spring, whilst females produce lime green coloured catkins.  Triangular toothed leaves, longer than wide with the widest part below the middle, with two tiny glands where the leaf joins the stalk.  Softwood, resistant to abrasion, woolly texture, easily worked but not very good as firewood due to its low flammability.  Easily propagated, they thrive in almost any soil.

The Black Poplar in general is a difficult tree to identify properly as the Black Poplar has many different hybrids that have been planted in Britain over the last two hundred years requiring specialist knowledge to tell them apart.  On a recent visit (May 2019) the BBSI recorder for North Hampshire, Tony Mundell, confirmed our trees to be Hybrid Black Poplars.

FBCP do not advise or recommend that Poplars are eaten or used as an herbal remedy.  The bark of the Poplar tree has been used for medicinal purposes as it contains Salicin, a glucoside that decomposes into salicylic acid (Aspirin) in the body having antiseptic, diuretic, expectorant and stimulating properties.