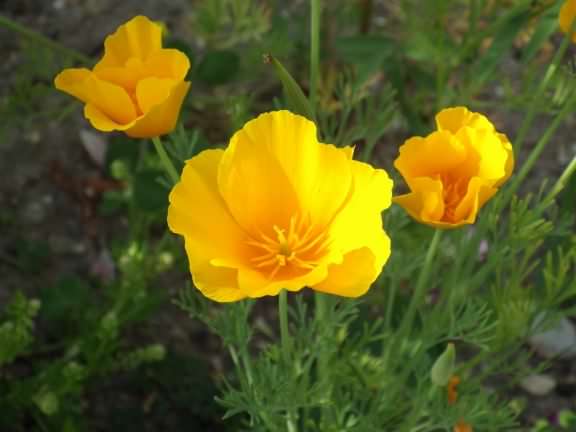 This lovely golden yellow poppy is native to the USA and Mexico and an introduced species elsewhere in the world as an ornamental garden plant, often in mixed wildflower seed packs.  It became the official state flower of California in 1903 as it's golden blooms were deemed a fitting symbol for the Golden State.

It is a variable perennial or annual.  Growing to between 30–150cm (12–60in) tall on slender stems with alternately branching glaucous blue–green foliage with the leaves alternately divided into lobed segments.  The solitary terminal flowers are silky–textured, with four petals, each petal 4–12cm (1.6–4.8in) across and can be seen from March through to September.  Outside of its native range is is often seen as an ornamental plant flowering in summer in gardens, borders and created wildflower areas, with solitary showy cup–shaped flowers in brilliant shades of red, orange and yellow (occasionally pink).

It became the official state flower of California in 1903.  The flowers which close each night, or in cloudy conditions mature to a slender, dehiscent capsule 3–9cm (1.2–3.5in) long releasing numerous small black or dark brown seeds.  "Purple Gleam" has gained the Royal Horticultural Society's Award of Garden Merit.

FBCP do not advise or recommend that California Poppy – Eschscholzia californica is eaten or used as an herbal remedy.