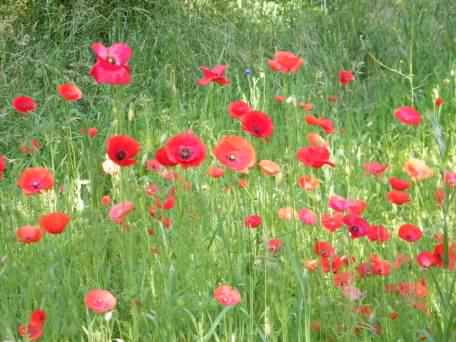 Photo ©2018–
Click for a larger image
Ribbon of Poppies

A common annual species of flowering plant once notable as an agricultural weed, and after World War I as a symbol of remembrance.  It is now rare in arable crops with the use of modern herbicides, the only species of Papaveraceae found in quantity being the Opium Poppy – Papaver somniferum.  It is an erect plant growing to 60cm (2ft) seen from late spring to early autumn with delicate bright red flowers on hairy stems of four petals to 75mm (3in) across, with a black centre.  Common in agricultural fields, roadsides and disturbed wasteland on calcareous soils they require some ground disturbance in the autumn to properly regenerate the next year.  Voted the county flower of Norfolk in 2002 following a poll by the wild plant conservation charity Plantlife.

Its origin in not known with any certainty but it is thought to be native to the eastern Mediterranean region, its range includes West Asia, North Africa and Europe.  Seeds of the Poppy can form a long–lived seed bank which is capable of growing after long periods when the ground is disturbed.  Like many other species of Poppy, the plant exudes whitish latex when the tissues are damaged.  It is recognised as symbols of fertility and death in some societies.

Given the extent of ground disturbance during World War I, it is often said that the first plants to regrow were the Poppies, blooming between the trench lines of the Western front.  From this the wearing of a poppy at and before Remembrance Day each year became an established custom.

FBCP do not advise or recommend that Common Poppy – Papaver rhoeas is eaten or used as an herbal remedy.   It has medicinal and edible usage but various alkaloids are present in all parts of the plant and could be potentially poisonous to horses, cattle and sheep if eaten in large quantities.  An infusion of the petals a traditional remedy taken for coughs, insomnia and poor digestion, and has been used for mild pain relief.