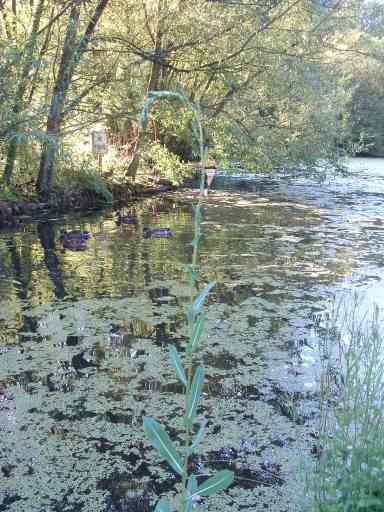 An annual or biennial plant of Southern Britain growing from 30–200cm (1–6.5ft), slightly foetid that is considered a weed of orchards, roadsides and field crops, it is fairly common in the rest of Europe.  Prickly Lettuce is the closest wild relative of cultivated lettuce – Lactuca sativa, it grows throughout the temperate regions of all major continents.  It gets its name of the "Compass plant", as in the sun the upper leaves twist round to hold their margins upright.  The waxy grey green clasping alternate leaves which exude a milky sap when cut are 5–35cm (2–14in) long grow along a spiny stem and get progressively smaller as they reach its top.  The sap contains lactucarium, which has been used as a mild pain relief, antispasmodic, digestive, uretic, hypnotic, narcotic and sedative.

The leaves are oblong lanceolate, often pinnated especially for the lower leaves, there are fine spines along the edges, whilst the undersides have whitish veins.  Flowers usually appearing in the upper part of the plant from July until September are 11–13mm (0.4–0.5in) wide five to twelve toothed petals pale yellow and often tinged purple as are the bracts.  The flowers mature to an achene that is grey and bristly tipped containing a single seed, the pappus is white with equal length hairs.

FBCP do not advise or recommend that Prickly Lettuce – Lactuca serriola is eaten or used as an herbal remedy.   Apparently the plant can be eaten cooked or raw as a salad, although it has something of a bitter taste, young shoots can be cooked and used as an asparagus substitute.