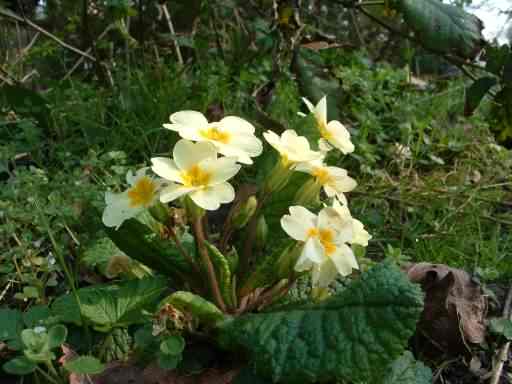 Possibly one of the UK's most recognisable and pretty perennial flowers, the Primrose is a native British plant flowering in the spring from March to May and seen in woodland clearings, shady areas, hedge banks, waysides and open grassland preferring damp well drained soils in shady areas.  Although not a member of the Rose family, its name is derived from "prima rosa", literally "first rose" of the year.  Pale yellow single flowers on hairy stems with yellowy orange centres, in dense clumps growing from a rosette of wrinkled leathery leaves, are a common sight although reported to be in decline in East Anglia.  They readily spread by seed in favourable conditions, in the garden they can be carefully divided and replanted.  The Primrose is also a native plant to western and southern Europe and northwest Africa, eastwards through Germany to Turkey and the Ukraine.  It grows to 10–30cm (4–12in) tall from a basal rosette of nearly evergreen wrinkled leaves 5–25cm (2–10in) long and 2–6cm (0.8–1.6in) wide, crenate or dentate margins on short leaf stalks.

The actinomorphic flowers are typically pale yellow, although white or pink forms are often seen in nature, they mature to a capsule opening by valves to release the small black seeds.  The flowers are hermaphroditic but heterostylous where individual plants bear either "pin" or "thrum" flowers, fertilisation can only take place between pin and thrum flowers.  The Primrose has suffered from over–collection, even though picking of Primroses or the removal of primrose plants from the wild is illegal in many countries, in the UK they are protected under the Wildlife and Countryside Act 1981, Section 13, part 1b.  It was voted the county flower of Devon in 2002 following a poll by the wild flora conservation charity Plantlife.  Polyanthus plants – P. polyantha, are a tall–stemmed and multi–coloured strain of P. vulgaris and Cowslip P. veris.