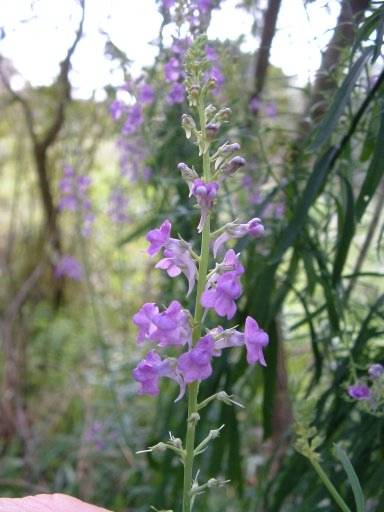 This plant is toxic to livestock.

An attractive herbaceous perennial plant growing on erect hollow woody stems to 45–90cm (18–36in) tall from a basal clump 15–30cm (6–12in) across, with a dense spike of numerous bright violet snapdragon like flowers 8mm (0.3in) long, which are occasionally pink, appearing June to August.  Frequently it is a garden escape, but can be found naturalised on waste ground, railway embankments and disturbed areas and walls.  It will grow in any well–drained soil in a sunny position and spreads by underground runners and also by seed.  Found over most of Europe and parts of America, apparently originating in the Mediterranean, possibly Italy.

Narrow strap like leaves are a bluish green in dense whorls, linear untoothed, appearing up the tall stems.  A valuable species plant liked by bees, butterflies and moths including the Toadflax Brocade – Calophasia lunula, White Spot – Hadena albimacula, the day flying Silver Y – Autographa gamma, and Hummingbird Hawk–moths – Macroglossum stellatarum.  Purple Toadflax is one of a genus of about 100 species of herbaceous annuals and perennials that was traditionally placed in the Figwort family Scrophulariaceae, but due to recent new genetic research it has been placed in the Plantaginaceae family.  The Linaria species are regarded as noxious weeds, however Toadflaxes are used as food plants by the larvae of some Lepidoptera species.