Parts of this plant are poisonous. 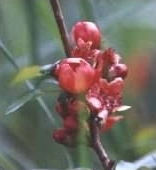 Widespread plant found in the America's, Europe and Asia.  Introduced to the UK in the 13th century, very common in the 16th–18th centuries being used for making marmalade.  Origin unknown but possibly Armenia, Azerbaijan, Georgia, Turkestan or Iran.  Cultivated in the Mediterranean area, it has become naturalised in many parts.  Highly regarded by the Greeks and Romans, being the "golden apple" given to Aphrodite as a symbol of love.  An important fruit crop in South America - Argentina produces 20,000 tons annually).  Its cultivation reached a peak in the 18th & 19th centuries, then declined with the increase in popularity of soft fruit.

Deciduous shrub or small tree, 4–6m (12–19ft) high and 3–4.5m (10–15ft) spread, with dense branches and a low habit.  Leaves oval or elliptical, 5–10cm (2–4in) long and 4–6cm (1.6–2.2in) wide, untoothed dark green above paler underneath and hairy, turning yellow in the autumn.  Flowers are 5cm (2in) across, red through pink and sometimes white, singly on short twigs, appearing May and June, after the leaves and are self–fertile, pollination is performed by bees who feed on nectar from the flowers in May and June.

FBCP do not advise or recommend that Quince – Cydonia oblonga is eaten or used as an herbal remedy.   Fruits are a light golden‑yellow, sometimes green or orange and usually pear shaped and very fragrant, ripening in late autumn and containing seeds which are poisonous, especially if a large quantity is eaten.

Once widely used in cooking, Quinces have been used for flavouring apple pies, ices and confections.  They can be eaten raw but only after storage as in the UK they do not ripen far enough during their season.  They can be stewed or baked and can be used in most recipes where apples are used, needing a similar cooking time as apples, sugar should be added after they start to change colour (turns pink when cooked).  They contain high amounts of pectin so any jams made with them in will set readily.  Quince jelly is a popular recipe, called in France - "cotignac", Spain - "membrilo" and "dulce de membrilo" in Argentina.  The word "marmalade" is supposed to be derived from "marmelo", the Portuguese name for quince.

The leaves have been used for tanning, and wine and cider can be made from the fruit, being reputed to benefit asthma sufferers.  Quince have been used as an herbal medicine, in an infusion to treat sore throats and diarrhoea, and they have been used in the cosmetic industry.  Many related cultivars and often confused with Indian "bael" fruit known as the "Bengal quince".  Chinese quince is a species of pear, Japanese quince is also a species of pear resembling the Chinese quince, commonly found in gardens because of its large scarlet flowers.