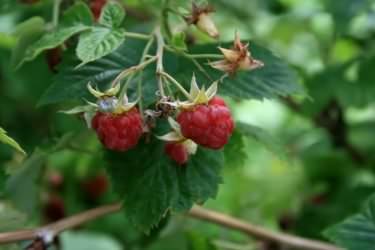 Photo ©2005 Karelj
Click any photo for a larger image 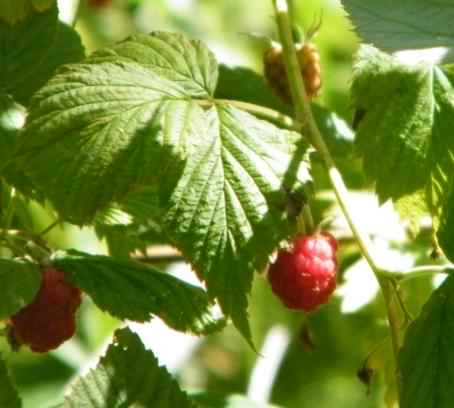 Small white five petaled flowers visible from May – June and producing fruit to August, Raspberry is a well known biennial native in many parts of Europe that can also be found in Asia, Japan and the continental US.  It grows in the wild in some parts of the UK probably as a garden escape.  Erect straight stems grow to 1.8m (6ft) from a perennial root system which propagates mainly from suckers.  Grown mainly for fruit production, wild Raspberry fruit is smaller than cultivated varieties, similar in shape to Bramble but red in colour with more and smaller parts to the drupe, it is also slightly hairy.

Plants found in Brickfields Park are either garden escapes or new growth from plants dumped with other garden rubbish.  Growing best in loamy soils it is usually planted for fruit production, in the wild it can be found growing in hedges, woodland edges, fields and scrub.  Used to make wines, brandies, jams and juices, Raspberry is also used for medicinal purposes, the leaves being used to make Raspberry Tea as a gargle and laxative.  It has also been used as a dye.  To distinguish Blackberry from Raspberry, when picked the torus (the centre receptacle or stem part of the fruit stays with Blackberry, with Raspberry the torus remains on the plant leaving a hollow centre.