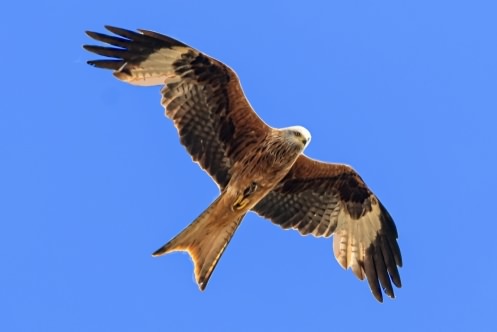 Photos ©2020 Colin Varndell
Click any photo for a larger image 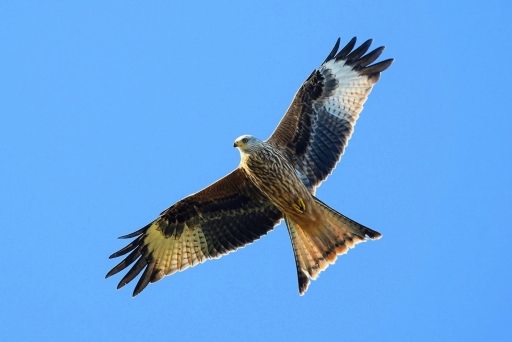 Classed as an Amber List bird species due to historical persecution, the Red Kite is a beautiful bird of prey of an overall red–brown colouration which can be seen all year round in certain areas of the UK.  Usually seen at height when soaring, it has two distinctive features, white bars to the wing undersides and a forked tail.  They are 60–70cm (24–28in) long with a 175–180cm (69–70in) wingspan, males weigh 0.8–1,2Kg (28–42oz), whilst females are slightly heavier at 1–1.3Kg (35–46oz).  The current numbers in the UK of around 1600 breeding pairs is a direct result of what is probably our most successful re–introduction scheme in the last few decades.  The total population of around 25,000 pairs is confined almost exclusively to Europe, with a few in North Africa.  Almost at the brink of extinction in the UK, the Red Kite was confined largely to Wales, but re–introduction schemes in central England, Yorkshire and Scotland have seen the species make a remarkable recovery.  For some years it was localised to the M40 area of the country (northern parts of the Chilterns and Cotswolds), where they could be seen in some numbers by motorists.  Its range is however on the increase with further introduction schemes and successful wild breeding.

Mainly a carrion feeder it can be opportunistic and will occasionally take small mammals and birds.  Several public viewing sites have been set up where large groups of Red Kite will gather daily to be fed.  Their call is a high pitched mewling and occasionally you will be alerted to its presence by this call, especially if there is more than one bird.  They are sedentary birds, occupying their breeding home range throughout the year.  The nest, built by both the male and female is a rough accumulation of twigs lined with grass and if available sheep’s wool and is located in the fork of a tree branch high above the ground.  The nest can be reused and added to over the years becoming very large.  One to three eggs are laid at three day intervals during April, these are incubated by the female for around thirty days per egg taking up to forty days for the full clutch.  The female rarely leaves the nest and is fed by the male during this time and for several weeks after hatching.  The young fledge in a variable period of around 45 to 68 days.  They reach sexual maturity at two years old and live on average for ten years although the oldest known Red Kite was 26 years old.

Although doing relatively well in the UK and enjoyed by many, Red Kites face threats from several sources, illegal poisoning by bait left out for foxes and crows, secondary poisoning by rodenticides, and collisions with power cables are all a concern.  Many Red Kites have been identified by fitting coloured wing tags with this having been done to all of the birds in the reintroduction programmes and a proportion of wild young.  The tags are a number - letter combination, and where these tags can be properly identified they should be reported to the British Trust for Ornithology on their website using the BirdTrack scheme.  Red Kites have the highest level of protection in Schedule 1 of the Wildlife and Countryside Act 1981, a fine of up to £5000 with a possible six month prison sentence being imposed.  Offences are taking, injuring or killing a Red Kite, taking, damaging or destroying a nest, eggs or young.  There is a further offence of intentionally or recklessly disturbing the birds close to their nest during the breeding season.  The laws in Scotland are further reinforced providing additional protection for the Red Kite under the auspices of the Nature Conservation (Scotland) Act 2004.

Historically, the Red Kite was revered as a useful scavenger during the Middle Ages that helped keep streets clean and was protected by a royal decree whereby killing one was a capital offence.  By the 16th century the Red Kite in common with many birds of prey was vilified and persecuted as "vermin" and accused of killing game birds, it was relentlessly pursued and driven to extinction in many countries.  As rarity ensued it was allegedly taxidermists and egg collectors who signaled the death knell of the Red Kite with it becoming extinct in England in 1871 and in Scotland in 1879.  The last few breeding pairs were only to be found in the remote wilds of Wales.