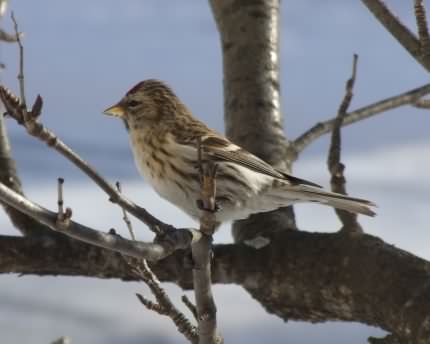 A member of the finch family, the Redpoll is a gregarious bird often found in flocks with Siskins feeding in Birch and Alder.  It is larger and paler than the very similar Lesser Redpoll.  Size to 13cm (5in) with a brownish colouration red forehead, black chin and buffy wing bars, deeply forked tail and yellow beak, breeding males have a red upper chest.  Two buff coloured wing bars in the inner wing, rump is brown, pink in the male, no tail markings, adult females do not have the red breast.  Juveniles plumage resemble that of the adult but there is no red forehead and the undersides are more heavily streaked.  Bouncy flight like a Siskin, with long sweeping undulations.

Call is a distinctive dry rattle "chuch–uch–uch" alternated with buzzes, also a trilling "tji–tji–tji".  Not a common breeding bird in the UK and is usually regarded as a passing migrant and winter visitor, it is more common to the North especially Scotland.  Usually seen October to April, in the North during summer and the South in the winter.  Breeding starts in May with four to five smooth and glossy eggs being laid, pale blue with pale pink or lilac markings, about 17mm by 13mm (0.65 x 0.5in).  Incubated for 10–14 days by the female, young are fed by both parents and fledge in a further 11–15 days.  Not usually a garden bird they are more commonly found in local woods.