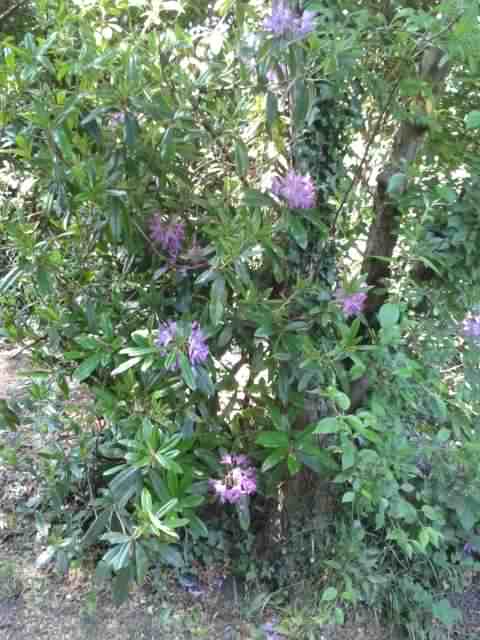 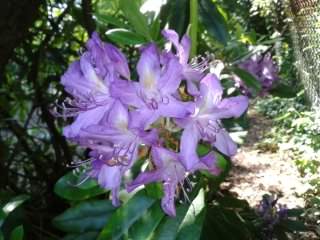 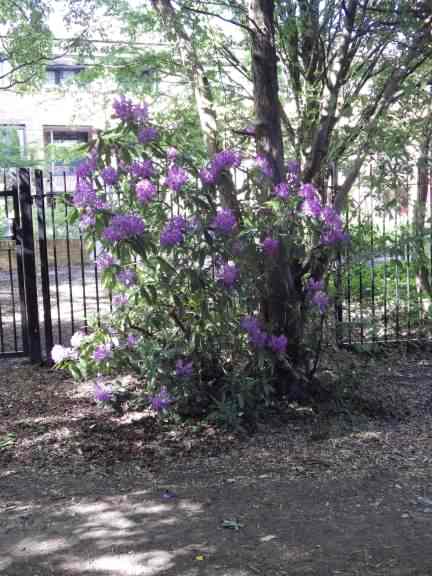 Rhododendron is classed as an introduced and invasive species under schedule 9 of the Wildlife and Countryside Act 1981[1].

A native species of the western and eastern Mediterranean to Western Asia, it was thought to have been introduced to the UK from China in the early 1800's, but recent research may indicate that it originated from Spanish or Portuguese plants.  Now widely naturalised and invasive in the UK after escaping from ornamental parks and gardens where it was often planted in Victorian times, it has quickly colonised large swathes of the countryside.  its use in gardens can produce a large screen or shelter in a relatively short time with an attractive flower in the spring.  It grows well on almost any type of soil, but thrives on peaty or sandy soils.

Regarded by many environmental groups as an alien species requiring total removal from the landscape in "rhody bashing" sessions.  From a woodland management view, despite its attractive show of spring flowers, invasive rhododendron can be a large problem producing dense thickets where little else can survive.  As well as woodland, rhododendron also colonises heath and grassland habitats and even sand dunes.  It allows very little light to penetrate through its thick leaf canopy, effectively eliminating other native plant species that are unable to grow due to insufficient light, which in turn leads to the loss of associated native animals.

Over time one Rhododendron plant can cover 100sq metres (120sq yards) and reach a height of 3–5m (10–17ft) or more.  It is a large evergreen shrub having shiny elliptical or oblong dark green (paler underneath) leaves 6–15cm (2–6in) long with clusters of pink or purple flowers forming rounded heads appearing May to June.  Several variants in the species are grown as garden plants, hedging or for their colour.  Rhododendron regenerates rapidly from seed and suckers where rootlets can form tangles of impenetrable evergreen vegetation, it has produced several hybrid forms.

It thrives in milder, wet climatic conditions, where there are poor, acidic soils and with the now usual wet and warmer winter conditions in the UK the Rhododendron is thriving.  Where the horizontal branches of a Rhododendron stand touch the ground, they will root, further extending the area of cover.  Seeds are very tiny and wind dispersed with each flower head producing 3000 to 7000 seeds.  Fungal associations with Rhododendron roots give it a competitive advantage and allow the plants to flourish in nutrient–poor soils.  The fungi are specific to ericaceous plants, including Heathers which explains its success in colonising heathlands using the mycorrhizal networks of the already established Heathers.

Restoring areas which have been colonised by Rhododendron is not just a matter of cutting the vegetation.  The leaves are waxy and herbicide treatment must include a chemical additive to help break this surface down.  Mechanical removal of Rhododendron will still leave a thick toxic humus layer and where this has built up over a number of years the resulting thick mat prevents natural regeneration, reinfestation can easily occur from the seed bank produced over the years.  For further information on woodland restoration of a Rhododendron infested site and Rhododendron poisoning can be found at these sites - Restoration | Poisoning

FBCP do not advise or recommend that Rhododendron – Rhododendron ponticum is eaten or used as an herbal remedy.   Rhododendron contains potentially toxic chemicals, phenols and diterpenes, which occur in large quantities in its tissues.  Differing forms of diterpenes occur in the leaves, flowers and nectar of Rhododendrons of each species, with some species not producing any at all, however Rhododendron ponticum does.  The toxins are used as a defence against herbivores before the tissues have acquired the toughness found in older tissues.  Leaf buds also have a sticky covering which also contains phenols, discouraging invertebrates as they become stuck.  The general toxicity of Rhododendron to herbivores means that it cannot usually be controlled by grazing.  Human poisoning is usually caused by the consumption of honey produced from Rhododendron flowers, resulting in relatively short term intestinal and cardiac problems, it is rarely fatal.

Update - Rhododendron has recently been shown to be susceptible to Sudden Oak Death, a disease caused by a fungus–like pathogen Phytophthora ramorum.  Widespread in the U.S., with recent reports of the disease in the UK, mainly affecting many Oak species it has also been found on several other species, including Douglas fir and Camelia.  Some species are prone to lethal trunk infections, whilst other plants are infected with supposedly more benign foliar and twig infections, with these foliar infections playing a key role in spread of P. ramorum by acting as an infected reservoir.  Rhododendron spp. has been determined as a major source of P. ramorum.  Mortality is most common where Oaks and these foliar hosts are found growing together.