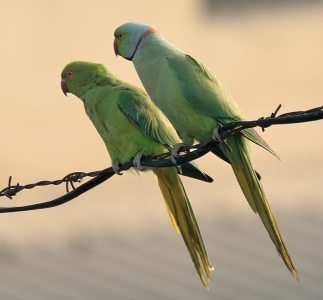 Length about 40cm (16in), with a wing length of 14 – 16cm (5.5 – 6in).  Generally green, with the face, abdomen and under wing–coverts a yellowish–green.  Neck and back of its head tinged blue, with a cheek–stripe in black extending down to the neck.  Middle tail feathers blue with green/yellow tips, other tail feathers green, black/red bill with black tips, yellow/white eyes and green/grey feet.  Females do not have the black stripe on the cheek or neck and their middle tail–feathers are generally shorter.  Young birds are as the female but their bill is a pale pink with greyish eyes.  Their plumage changes to that of the adult at about 18 months taking a further twelve months to complete.  A vegetarian species in their Asian home range, in Britain they are omnivores, feeding on scraps available in the urban environment.  They feed on fruit, household scraps, nuts, seeds, berries, grain, and even meat.  Frequent visitors to bird tables and garden feeders, particularly during winter months where it is thought they could not survive British winters without such a food source.

An introduced and established species in Britain noted in the mid 1800's, there are several groups located mainly around London, Kent, Surrey, Essex, and recently in north Wales.  Popular pets for over 100 years regular escapes have given rise to localised populations.  More recent escapees and roving birds are to be seen over much of the country occasionally becoming temporarily established.  They have only started to breed successfully since the early sixties.  Other colonies have been reported from Belgium, Netherlands and Germany, mainly in and around major cities.  Several subspecies are seen with most European birds being similar to P. k. borealis, a common species in its native region which is arid tropical countryside from West Africa through India to the southern Himalayas.

Found mainly in urban or suburban areas with large gardens and parks, over much of sub–Saharan Africa, Southern Asia, Britain, Europe, Mediterranean and Egypt, nesting in tree–holes (sometimes utilising old Woodpecker holes) laying 2–4 eggs, incubated for 21–22 days, fledging at 40–50 days old.  The young are cared for by both parents.  In their native range the are found mainly in open woodland, secondary forest, cultivated areas and farmland.  A few isolated birds are seen in Brickfields Park in most years, the latest sighting was on the 5th April 2016.