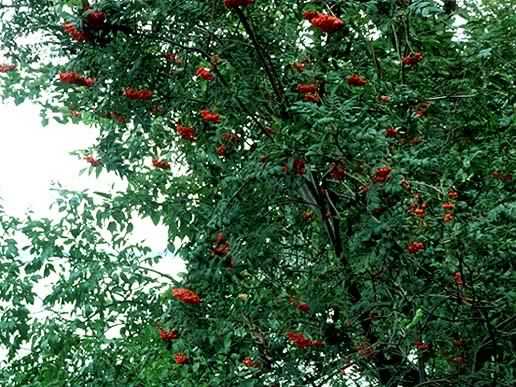 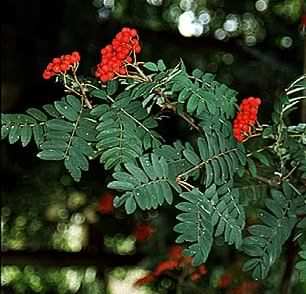 Small vigorous hardy deciduous tree producing large number of red berries in autumn.  Can be coppiced, usually grows to about 15m (50ft) but up to 18m (60ft) preferring wet but not water logged light and peaty soils, rocky and grassy slopes.  A pioneer species not tolerant of shading except in some Pine woods, can attain an age of 100 years or more.  Most in east and Northern Britain but native throughout including Ireland.  Also can be found in Europe, North Africa and Asia Minor.  Pinnately formed leaved of five to eleven sessile leaflets, lance shaped with serrulate edges and hairy on the underside, white flowers of five petals appearing in May ripen to clumps of red Globular berries in August.  Eaten by birds who then disperse the seed in their droppings.  Dense hard pale brown wood used in turnery and carving, a good firewood.  Has been used for tool handles, mallet heads, bowls and platters.  Apparently Rowan was also used to make bows in the middle ages.  Rowan's alternate name of Whitebeam may lead to confusion with Whitebeam.  The berries are edible and used to make Rowan jelly which is eaten with game or meat.

FBCP do not advise or recommend that Rowan – Sorbus aucuparia is eaten or used as an herbal remedy.   To make Rowan Jelly - cut the berries from the stalks in clumps, wash and remove as much of the stems as possible.  Boil in just enough water to cover them for about 20–25 minutes until tender.  Strain through a muslin cloth or jelly bag, but do not force them through or the juice will become cloudy.  Add 1Kg (2.2lb) of sugar to one litre (1.76pt) of juice and stir until dissolved, boil rapidly until the setting point is reached, skimming as required.  Pour into sterilised jars and seal with lids, of the "click" button type if possible.  A variant on this recipe adds an equal amount of Crab Apple, reducing the sugar content to 450g (1lb) per 600ml (1pt) of juice.  The apples should be cooked to a pulp separately from the berries, adding them to the juice and sugar mixture before boiling.

To test for setting point - place a small clean dry plate into a refrigerator for 10mins, to test remove the plate from the refrigerator and put a small amount of the jam onto the plate and place back in the fridge for five mins.  Test by pushing the edge of the jam to see if the surface wrinkles, if it does it is ready, if not continue boiling for another 5–10 mins and test again.  Alternatively with a jam thermometer the setting point is reached at about 116–120 Deg Celsius but we have found the "wrinkle" test to be the easiest.  We have found that as the setting point is reached the jam gradually turns a rich dark golden red colour.