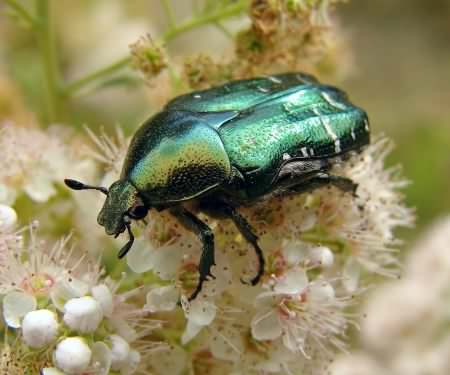 A reasonably large beetle growing to 18mm (0.7in) long.  Metallic green colouration (but can be bronze, copper, violet, blue/black or grey) with a distinct v shape across the upper back just below the head and several other irregular small white lines and marks.  The underneath is a coppery colour.  Laborious movement amongst grass and vegetation and capable of flight.  Found on roses (from where it gets its name), a very common insect in some areas usually seen between May to June/July occasionally to September, usually in sunny weather.  Feeds on foliage, buds, flowers and fruits of blackberry, raspberry, strawberry, cabbage, beans, beet and pepper.

Larvae over winter in soil or rotting timber, rising to the surface in the spring to pupate.  After a few weeks the adult beetle emerges to feed for 4–6 weeks.  Following mating the females deposit groups of 6–40 eggs about 15cm (6in) below the soil surface in sandy or grassy areas and then die (eggs are occasionally laid in rotting wood).  Larvae hatch, depending on the temperature in 1–3 weeks.  Found over Southern and central Europe and parts of America, but apparently uncommon in the UK.  They are capable of a heavy lumbering flight with a low droning sound.  Commonly known as Leaf Chafers.