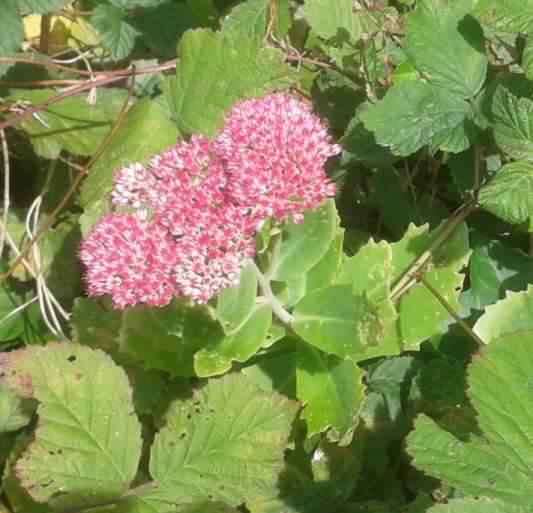 Sedum is a large group of over 450 flowering succulent plants in the Crassulaceae family also commonly known as Stonecrops.  With some subspecies now found almost worldwide from their garden and ornamental usage they can have annual, perennial, prostrate and upright forms.  Several cultivars have been awarded The Royal Horticultural Society's Award of Garden Merit, of which a common garden variety "Autumn Joy" or "Herbstfreude" is the most likely the form we have found in the park and pictured here.  This is obviously as a result of one of the parks neighbouring properties dumping their garden waste.

As a genus they can have red, pink, yellow and white flowering forms, but 'Autumn Joy' has red Broccoli type terminal flower heads (panicles), blooming from August through November and into the following year.  The miniscule star shaped flowers usually have five petals, occasionally four or six, with 8–12 stamens as petals.  Many Sedum species are food plants for several butterfly.  The terminal panicles of "Autumn Joy" are on stiff woody stalks 15–46cm (6–18in) tall which die back after flowering to a brown brittle stem.

FBCP do not advise or recommend that Sedum – Crassulaceae is eaten or used as an herbal remedy.   Stonecrops are in general are regarded as edible and used as a salad vegetable although toxicity has also been reported, excepting Sedum rubrotinctum colloquially known as "jelly–beans" or "pork and beans", which is poisonous and in some cases may cause skin irritation.

In recent times and with environmental credentials in mind, Sedum is extensively used in roof coverings or "Green" roofs with some modern factories exceeding 40,000 M2 in area.  They help to reduce rainfall runoff by storing water in the succulent parts of the plant and in hotter periods can help to keep the building cooler.