Photo ©2005 Dysmorodrepanis
Click any photo for a larger image 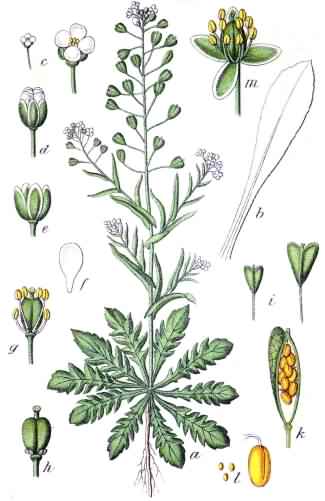 Shepherd's–purse named because of its triangular, purse–like pods, is a small annual of the Brassicaceae or mustard family growing to 0.5m (19.5in) tall.  It is native to eastern Europe and Asia minor but is naturalized and considered a common weed in many parts of the world, especially in colder climates, including Britain in disturbed areas, roadsides, gardens etc.  Unlike most flowering plants Shepherd's–purse flowers almost all year round and reproduces entirely from seed, it is capable of producing several generations each year.  It grows from a basal rosette of short stalked and lobed leaves from which a stem about 0.2–0.5m (8–20) tall emerges.  The stem leaves are alternate and clasping, lance–shaped to oblong, mostly with shallow, sharp teeth.  The small white self pollinating flowers seen from May to October are in loose racemes are 0.5cm (0.2in) across with four petals, and produce seed pods which are triangular heart–shaped containing many tiny seeds, one seed pod may produce over 4,000 seeds.  The seeds are sticky and will be readily transported on clothing and animals where they will germinate almost anywhere, Shepherd's–purse can be found growing in very diverse environments.

FBCP do not advise or recommend that Shepherd's–purse – Capsella bursa–pastoris is eaten or used as an herbal remedy.   Shepherd's–purse is gathered from the wild or grown for food, as a supplement in animal feed, for cosmetics, and for medicinal purposes.  All parts of Shepherd's–purse are listed as edible, but have a biting peppery taste and can be eaten raw or cooked.  The fresh or dried root has been used as a ginger substitute.  Medicinally Shepherd's–purse has been used in the treatment of bleeding disorders, diarrhoea etc.  A tea made from the plant is a diuretic and has an agent that is effective against scurvy.  The herb has been used for healing wounds, fresh cuts, etc., usually used as a poultice.