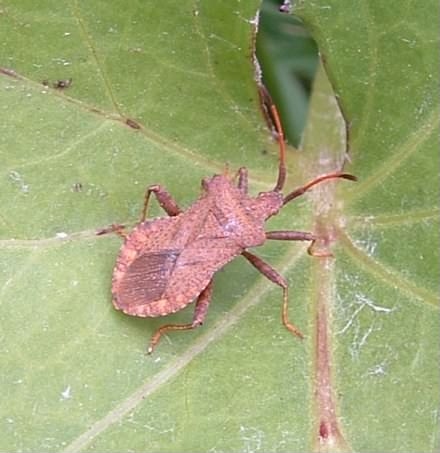 The Dock Leaf Bug is a very common species in the British Isles and parts of Northern America reaching a length of 12–15mm (0.5–0.6in).  Found on many flowers both in the garden and open grassy areas, often in small groups of both adults and larvae.  It does not have the side stripes seen in other Shieldbug species and its shoulders are more rounded.  It has two small distinctive pointers in the front of the head between the antennae which have dark tips.

The Dock Leaf Bug is a large and mottled red brown squash bug with a broad oval abdomen, in the UK it is regarded as a member of the Shieldbug family.  There is one generation per year with adults mating and laying eggs in the spring.  The larvae feed on Dock, Sorrel and other related plants in the Polygonaceae, new adults may be found from August onwards.  Common and widespread in southern Britain, including Ireland, where it may be found in a variety of dry and damp habitats.  Length 13–15mm. (0.5–0.7in)

Coreidae are a large family of predominantly herbivorous insects of which there are more than 1,800 species in over 250 genera.  They vary in size from 7–45mm (0.25–1.7in)).  Variable body shape, with some species broadly oval while others are slender.  In North America they are colloquially called "Squash Bugs" as some of the species are a pest of squashes.  Some exhibit parental care by carrying their eggs.  Their general features are an oval–shaped body, four segment antennae, a numerously veined forewing membrane.