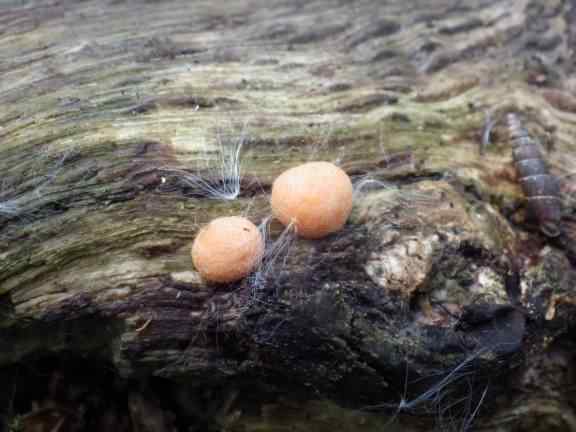 This species is actually not a fungi even though it looks like one, it's a slime mould, a curious group that show characteristics associated with both animals and fungi.  As is common with slime moulds, it goes through a number of rather incredible morphological phases as it matures.  They are a unicellular organism capable of movement using cells known as swarm cells enabling them to gradually move around on their rotting substrate consuming bacterial and fungal spores.  At one stage in their complex life cycle they can develop fruiting bodies (aethalia), like those in our images, this gives rise to the common assumption that they are fungi, which they are not, although in a similar manner to fungi they do disperse spores once the fruiting bodies have matured and dried out.

In their movemental or plasmodial phase they are a reddish in colour but due to their miniscule size they are rarely seen, but slowly creep along in thin strands digesting their food sources.  With suitable conditions, these unicellular individuals aggregate to form the fruiting bodies and release their spores to become the next generation.  The fruiting bodies which occur scattered or in groups on damp rotten wood can be seen from June to November. These are small pink maturing to brown cushion like blobs 3–15mm (0.12–0.59in) in diameter. Lycogala epidendrum is cosmopolitan in distribution, common and widespread in the UK. They look like pink sweets with a sugar sprinkling.  Similar the False Puffball slime mould, Enteridium lycoperdon which has a white to grey/brown lumpy appearance.