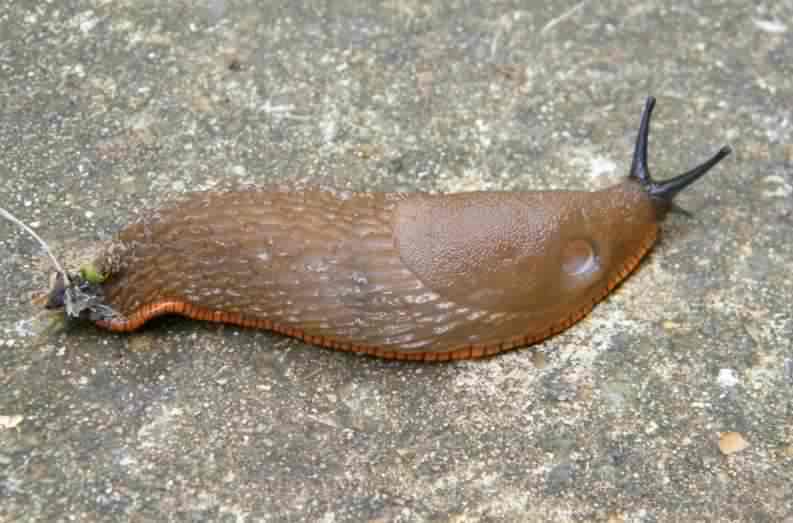 Images are of the red/brown morph
- Arion ater rufus

Arion ater, the European Black Slug is a common species of large air–breathing (pulmonate) terrestrial slug in the family Arionidae.  Native to the UK and Europe, it is an introduced species to other parts of the world.  It is found in gardens, fields, pastures and similar damp vegetated habitats.  Brown wrinkled body with a contrasting pale yellow or orange sole, the tentacles are bluish grey to black.  They have no keel.  A pneumostome (breathing pore) is located on the right side within the mantle behind the head.

Generally black in colour but they are a variable species with brown, grey, orange or rust coloured forms being seen.  The brown form is under dispute with some classifying it as separate species, Arion rufus, the Red Slug, apparently an introduced species.  The national recorder now records them all as Arion ater agg.  Colour morphs are regarded as being geographically located with the black forms more to the north, whilst the lighter forms more to the south.

They grow to about 10–15cm (4–6in) in length and are an omnivorous species, eating carrion and dung as well as vegetable matter.  Largely nocturnal and living for about a year large numbers can be seen after daytime rain.  Clusters of pearly–white spherical eggs, about 5mm (0.25in) in diameter, are often dug up in the garden and compost heaps.  They are hermaphrodites.