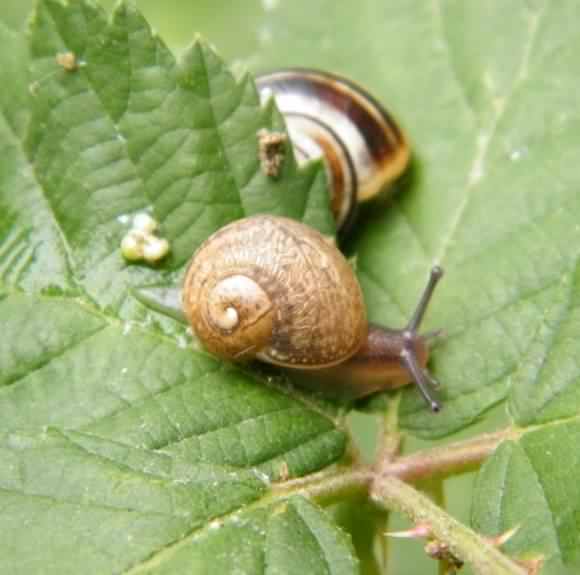 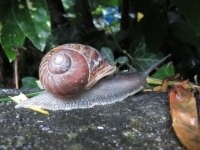 To the gardener the Garden Snail is often considered to be a pest whose strong homing instinct makes human control difficult.  They are often seen after rain between March and October, and leave a tell–tale trail of mucus.  Being hermaphrodites, garden snails each have both male and female reproductive organs, but although they can mate with themselves, its more usual to find a partner.  After about two weeks approximately 80 spherical 4mm (0.16in) pearly–white eggs are laid into crevices in the topsoil, with up to six batches of eggs laid in a year.  The young snails take one to two years to reach maturity.  It is native to the Mediterranean area and western Europe, and is very widely introduced and naturalised elsewhere in the world including eastern Europe, southern Africa, Australia, New Zealand, North America and southern South America.  The garden snail is a herbivore and has a wide range of host plants.  It feeds on numerous types of fruit trees, vegetable crops, garden flowers, and cereals.  It is a food source for many other animals, including small mammals, birds, lizards, frogs and parasitic nematodes.

Slightly larger than the White–lipped Snail, adults have a thin calcareous shell 25–40mm (1.0–1.6in) in diameter and 25–35mm (1.0–1.4in) high, with four or five whorl.  Variable in colour the shell is generally dark brown with yellow stripes, flecks, or streaks.  The body is soft and slimy, brownish–grey, and can be retracted into the shell when the animal is inactive or threatened.  The snails head has four retractable tentacles, the upper two of which have eye–like light sensors, and the lower two of which are smaller, tactile and olfactory sensory structures.  Its mouth is located beneath the tentacles, and contains a chitinous radula which the snail uses to scrape and manipulate food particles.  During dry and cold weather the snail enters a state of "aestivation" where the aperture of the shell is sealed with a thin membrane of dried mucus called an epiphragm, which helps to retain moisture.  When hibernating, the Garden Snail avoids ice formation by altering the osmotic components of its blood essentially adding an anti–freeze, and can survive temperatures as low as –5°C.

FBCP do not advise or recommend that White–lipped Snail – Helix aspersa is eaten or used as an herbal remedy.   It was introduced to California as a food animal in the 1850s and is now a notorious agricultural pest there, especially in citrus groves.  The species is an edible delicacy, in France it is known as "petit gris"