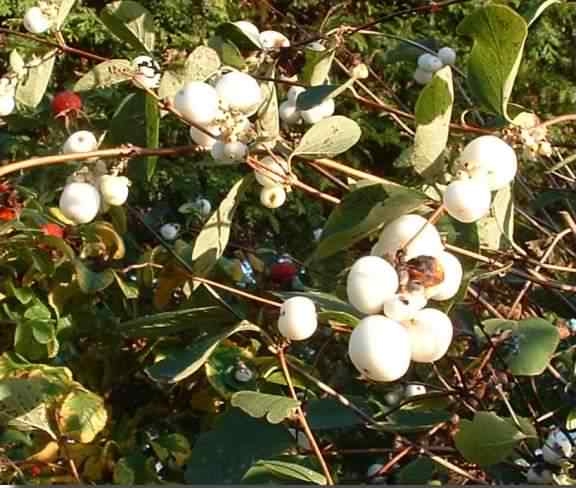 Growing to 2.5m (8ft), Snowberry is a densely branched shrub, with twigs of a slender yellow brown and small ovate opposite buds.  The small flowers appear successively from June to August followed by white berries from August to October.  It an important source of food for bees.  It is a native of North America and was introduced into Europe in the second half of the nineteenth century (although some sources list 1817), where it has now become a common garden and hedging plant becoming, naturalised in many places.  It is also used for erosion prevention on steep banks and for its foliage.

It thrives in non–fertile areas due to its moderate requirements in soil fertility and moisture.  It sprouts prolifically from stumps and also produces root suckers freely so that in some areas it spreads to such an extent that it becomes a weed that is difficult to eradicate.  Grows from rhizomes and commonly forms dense thickets, however it can propagate by cuttings, suckers and seeds.

Dull green hairless leaves on short stalks, opposite broadly ovate 2–5cm long with entire margins, on vigorous shoots the leaves are asymmetrically lobed.  terminal spikes (or axils of upper leaves) of 3–7, five petaled bell shaped flowers, hairy inside and pinkish in colour 6mm (0.3in) diameter, appear May - July developing to round white waxy berries about 1–2cm in (0.5–0.8in) diameter as a drupe, each drupe containing two nutlets with one1 seed per nutlet.  The fruits are generally considered toxic and are not usually eaten by birds.  The leaves are a food plant for the caterpillars of Death's–head Hawk–moths.

FBCP do not advise or recommend that Snowberry – Symphoricarpos albus is eaten or used as an herbal remedy.   Snowberry is poisonous to human beings as it contains the alkaloid Chelidonine, which causes gastrointestinal problems and vomiting, it can also cause dermatitis.