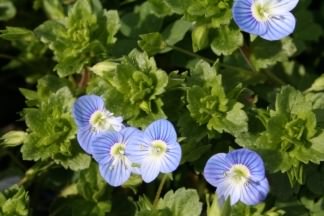 Common Field–speedwell is a common widespread small annual introduced weed in the UK, native to Eurasia, is also introduced in North America, Europe, New Zealand and Japan.  Small blue flowers of four petals with dark blue radial stripes and a white centre are 1cm (04in) across appearing singly on hairy stems from the upper leaf axils.  Flowering throughout the year it is self fertile and spreads prolifically by seed distribution, the seeds being miniscule at 1–2mm (0.04–0.08in) long can be wind distributed.

Small dark green coarsely toothed, short stalked, lightly hairy ovate leaves are 1–2cm (0.4–0.8in) long and found in dense groupings on the stem arranged as pairs lower down and alternate higher up.  The plant forms a dense, sprawling prostrate ground cover, usually found on waste ground, fields and gardens on a range of soils.