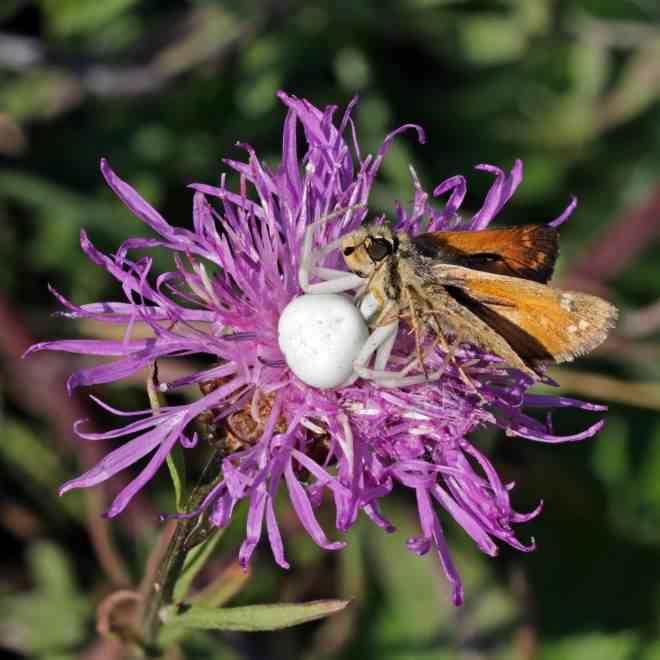 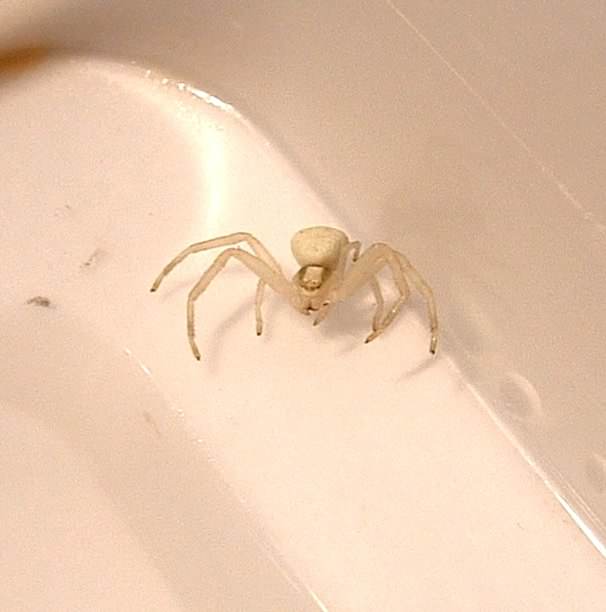 A reasonably common and distinctive carnivorous spider of southern UK, North America and Europe, found in gardens, open grassland, woodland edges and scrub.  Sexually dimorphic in size the larger females body colour ranges from pure white to yellow or greenish and they can undergo a slow, background–matching colour change aiding its habit of sitting camouflaged in white or yellow flower heads where it waits to ambush other insects (flies, butterflies, grasshoppers, and especially bees) and invertebrates.  The body is distinctly angular and broadly flat, giving it a crab like appearance, also rather like crabs the Crab Spider has a unique ability to move sideways.  The front two pairs of legs are longer than the back two pairs which in males are alternately banded dark red or brown and white.

Males are similarly shaped but smaller and darker ranging from red to pale brown with a white back and two dark stripes, white central stripe to the head, they cannot change colour like the females.  Adults can be seen from May to August.  Females are 6–9mm (0.25–0.35in) long whilst males are smaller at 3–4mm (0.12–0.16in).  Crab spiders only produce silk for protection of their eggs.  They feed on common insects using venom to immobilize their prey, and often eat much larger insects than themselves.  Given the females white or yellow colouring the Crab Spider is usually found on several white or yellow plants and flowers such as Daisies, Red Clover (Trifolium pratense) and Buttercups.  As adults they have a small home range and don't travel far, but the species colonises new areas by the spiderlings "ballooning", spinning a long silk thread to be carried on the wind transporting them to new areas although there is no guarantee a new territory will be suitable.