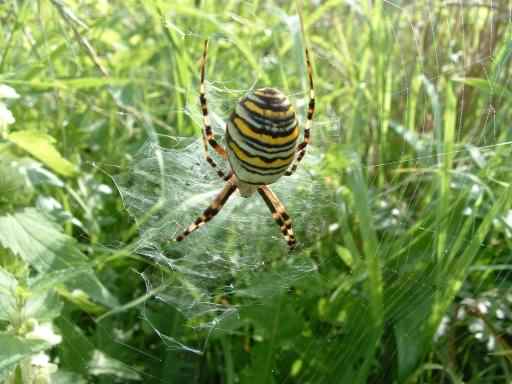 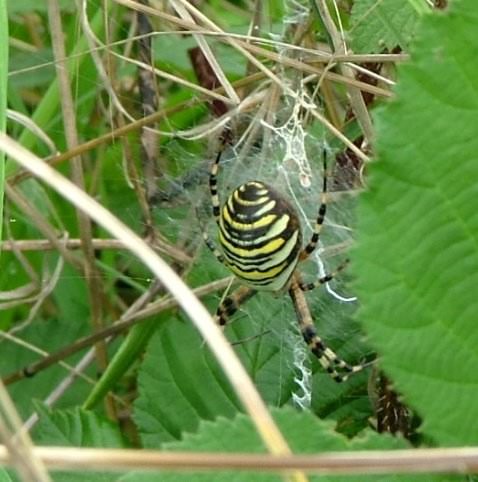 Regarded as an introduced species to the UK from the Continent where they mainly occur around the Mediterranean where their range extends as far north as Scandinavia.  The Wasp Spider was first recorded in the UK in the early 1920's and then only on the south coast, however it has been reported gradually moving northwards and recently noted in Cambridge.  Usually seen during July to October, females are distinctively marked with a yellow and white striped abdomen and a silvery cephalothorax, and are about 11–15mm (0.4–0.6in) long, whereas males are a pale brown and 4–5mm (0.16–0.20in).  Normally seen in long grass and vegetation where the female lays an egg sac on grass leaves, unmanaged grasslands are particularly suitable, but they have also been reported in Barley.  The zigzag pattern can just be seen in the bottom portion of the lower photo.

The male being much smaller than the female waits at the edge of the web until the female has shed her skin before mating, as he is afforded some safety as the females jaws are still soft, however males can be eaten during mating.  After mating the female makes a brown cocoon with the young hatching in the next spring.  The female dies in the winter.  They hunt grasshoppers, crickets and other flying insects.  Should an insect that is too big be caught the female cuts through that portion of the web so the insect falls out.  They build an Orb web with a vertical zigzag pattern from the centre downwards, called a "stabilimentum", the purpose of which is unknown but is thought to deter birds from flying into the usually quite large web.  It may also be a lure as the spider shakes the web when prey is approaching.