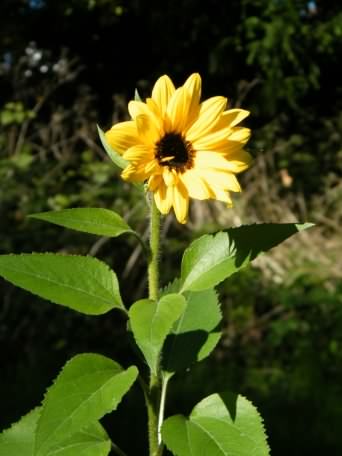 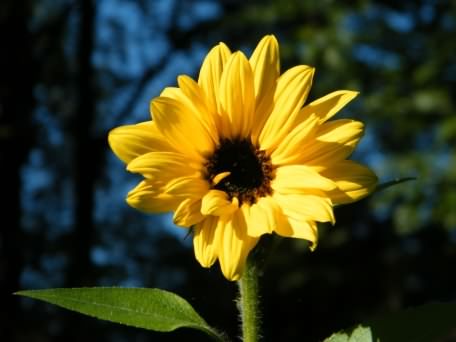 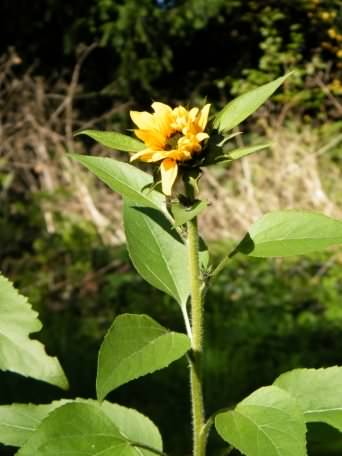 The sunflower is a another genus of around 70 species in the Asteraceae family, with showy round inflorescences composed of hundreds of small florets with a ring of usually bright yellow petals.  The common sunflower of gardens and fields is Helianthus annuus.  They are a tall annual or perennial plants growing to a height of 3m (10ft) with usually one large terminal flower head on a rough and hairy stem with opposite ovate or heart shaped leaves.  Young plants are heliotropic; the flower heads track the sun but this stop once they bloom.  Petiolate leaves are dentate and often sticky.  The species is apparently native the USA, but widely found worldwide as a garden plant, food and forage crop.  One species, the Whorled Sunflower, H. verticillatus, has been listed as endangered by the U.S. Fish and Wildlife Service.  They grow to 2m (6.5ft) and are found in woody areas, streams and damp grassy places.

Helianthus species are used as food plants by the larvae of many Lepidoptera.  The Sunflower is the state flower of Kansas from where it gets its colloquial name of the "Sunflower State" and also the national flower of Russia.  There is a mathematical patterning the central cluster of florets which are always in a spiral pattern.  Generally each floret is angled to the next by the "golden angle" of 137.5°, producing a pattern of interconnecting spirals of Fibonacci numbers.

FBCP do not advise or recommend that Sunflower – Helianthus annuus is eaten or used as an herbal remedy.  Sunflowers are typically grown for their seed either roasted or processed for their oil content.  They can be processed into an alternative to peanut butter, used as bird food, produced into margarine and used as bio–diesel.  Some varieties contain a higher level of healthy mono–unsaturated fats in than Olive oil.  Residues remaining after oil processing is used as a livestock feed.  Sunflowers can also be used as a soil conditioner or remediation to extract toxic ingredients from soil; reputedly they were used to remove atomic toxins from soil after the Chernobyl disaster.