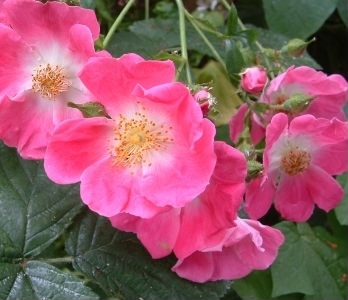 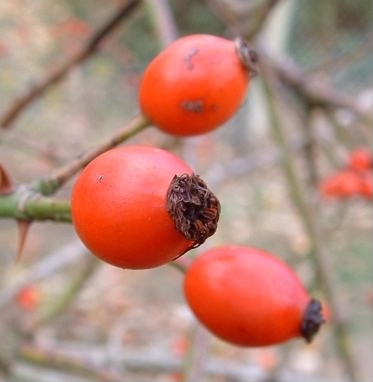 A deciduous scrambling bushy shrub with stems that carry backward curving prickles and bristles growing to 3m high by 2.5M across (10ft x 8ft) found in woodlands, hedges and scrub.  hermaphroditic scented flowers pollinated by bees, moths and butterflies are seen June to early August maturing to an oval red fruit (hips) 1–2cm (0.4–0.8in) long containing many small yellow seeds 4–7mm (0.157–0.275in) long.  It spreads mainly by dispersal of seed often by birds, however it also produces suckers from the crown which sometimes exceeds 1m (3ft) in diameter at the base forming a dense mass.  The pinnate leaves have five to seven oval serrulate leaflets with numerous glandular hairs.

Five petaled flowers are generally a light pink with a white base, mature to a Globular fruit (hips) are initially green becoming a bright red when ripe and often have bristles.  Sweet Briar hips have a high vitamin C content and are harvested commercially for processing into Rose Hip syrups.  Closely related to the Dog Rose which has a larger whiter flower rather than pink.  Grows in most soils including heavy clays, preferring a sunny position but dislikes being waterlogged.  Companion planting with Garlic or Alliums helps to protect from disease and insect predation.  The leaves are apple–scented when rubbed due to sticky brownish glands on the underside and the flowers are slightly scented.  Sweet Briar hybridises freely with other rose species.

Rose hips oil is extracted from the Rosa rubiginosa ssp. rubiginosa fruit containing flavonoids, tannins, carotenoids, it tissue regeneration properties helping to reduce scars and wrinkles.  It contains vitamin F also known as an essential fatty acid, when absorbed through the skin they are converted to prostaglandins which are involved in cellular membrane and tissue regeneration.  The fruit (which apparently tastes better after a frost) is used in making jellies and has possible uses as a cancer cure.  It is not generally a fodder crop although Goats graze Sweet Briar.  The species name rubiginosa means "rusty", a name derived from the colour of the stems and leaves which are often a brownish–red.  Briar pipes are not made from the Sweet Briar but from the Tree Heath – Erica arborea.

A native species of Europe and western Asia, Sweet Briar is found on most continents in poor soils and with time can cover large areas.  A major weed in some localities it is classified as an "environmental weed" and a restricted plant in New Zealand and is banned from sale, propagation and distribution.  It is an invasive species Australia, and a category 1 Declared Weed in South Africa.