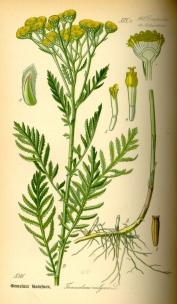 Tansy is a yellow flowering perennial, herbaceous flowering plant of the Aster family with finely divided compound leaves and yellow, button–like flowers on erect branching stems, growing to 50–150cm (1.6–4.9ft) tall.  It is native to temperate Europe and Asia, and is an introduced plant to other parts of the world, becoming invasive in some countries.  Leaves are light green alternate, 10–15cm (4–6in) long and are pinnately lobed being divided almost to the centre into around seven pairs of segments, again divided into smaller lobes having toothed edges, giving the leaf a somewhat fern like appearance.  Flat–topped, yellow flower heads are produced in terminal clusters from mid–to–late summer with a heady scent to that of Camphor.  The flower heads can be used to produce a yellow dye.

FBCP do not advise or recommend that Tansy – Tanacetum vulgaris is eaten or used as an herbal remedy.   The leaves and flowers are toxic if consumed in large quantities, they contain a volatile oil which contains toxic compounds including Thujone, which can cause convulsions and liver and brain damage.  Some insects, notably the Tansy beetle – Chrysolina graminis, have evolved resistance to the toxins.  Tansy has a long history of use, first recorded as being cultivated by the ancient Greeks for medicinal purposes.  During the Restoration period, a "tansy" was a sweet omelette flavoured with tansy juice, and in the BBC program "The Supersizers go Restoration", chef Allegra McEvedy described the flavour as "fruity with a sharpness to it and then there's a sort of explosion of cool heat a bit like peppermint", however the programme's presenter Sue Perkins experienced some tansy toxicity.  Tansy is listed as having been used to treat intestinal worms, rheumatism, digestive problems, induce abortions, fevers, sores, as a face wash and to "bring out" measles, although now most of its medicinal uses have been discredited.  Tansy contains a volatile oil which can cause contact dermatitis in sensitive individuals.