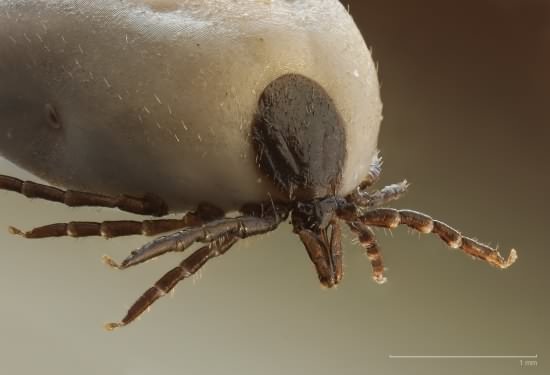 Photo ©2009 Richard Bartz
Click any photo for a larger image 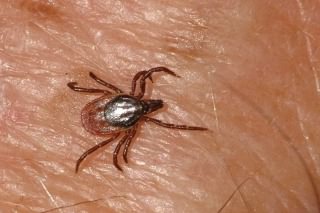 Ticks are small parasitic invertebrates from the Arachnid class that live by feeding mainly on the blood of mammals and birds.  They vary in size from a few millimetres to over 1cm (0.2–1in) and are common and widespread about the world in warm, humid climates in dense undergrowth and long grass where they await passing host animals often locating a potential host by its smell or body heat.  There are over twenty species in Britain related to various different mammal or bird hosts, the Sheep Tick – Ixodes ricinus is a common species.  They are active all year but more so during spring and autumn.

Ticks are classed into "hard" or "soft" ticks, a rather obvious classification where soft ticks are soft bodied and easily squashed, whereas the hard ticks are have a hard shield on their dorsal surfaces.  When not engorged both are rather similar to a small spider, once fed their bodies become much enlarged and swollen.  Hard ticks mouthparts are a beak–like structure at the front, soft ticks have their mouthparts on the underside of the body.  There is a third class, Nuttalliellidae which contains only one species, Nuttalliella namaqua, found in southern Africa.

Like other invertebrates ticks have four stages of development; an egg which hatches into a larva with six legs, a nymph which then acquires another leg pair after is first blood meal, and adult.  The number of nymphal stages or instars can vary between species but each instar requires a blood meal, and because of this they are vectors for several diseases affecting humans and animals including Lyme a serious bacterial infection, they are also implicated in the transmission of a number of other bacteria, viruses and protozoa.

Check yourself and pets regularly after being outdoors especially if in suitable tick habitat, undergrowth and long grass.  If a tick is found do not squeeze or pull the tick off by the body as its head will become detached and remain on the skin presenting a further risk of infection.   The safest way to remove a tick is to use a pair of fine–tipped tweezers or a tick removal tool to slip under the mouthparts and between the skin pulling and rotating upwards slowly and firmly to remove the whole tick.  Clean the affected area with an antiseptic lotion and monitor for any redness, swelling or infection.  Seek medical help if a rash or flu–like symptoms develop and mention you have been bitten by a tick.