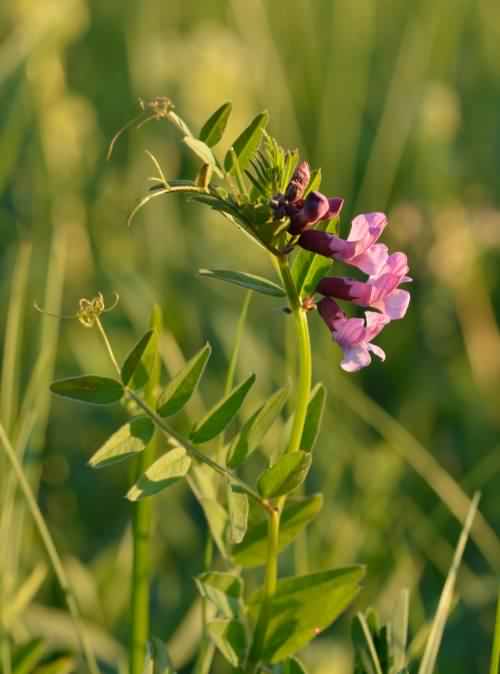 Bush Vetch is a nitrogen–fixing perennial climbing plant that will be found in many parts of the world including Europe, UK, Russia, USA, eastern Canada and Central Asia.  It grows in hedgerows, grasslands, the edges of woodland, roadsides and rough ground.  Growing from a rhizomatous root structure, it climbs using branched tendrils at the end of each leaf stem, which curl around surrounding plants providing support.  Growing to around 30–40cm (12–16in) high it can occasionally reach 1m (3.25ft), it has a compound pinnate leaf structure with 4–8 pairs of opposite leaflets ending in branched tendrils.  Each elliptical leaflet 20–30mm (0.8–1.2in) long and 8–10mm (0.3–0.4in) wide, and a well defined midrib giving the leaf a slight "V" profile.

Lilac to blue–purple flowers 12–15mm (0.5–0.6in) long of five petals, similar in appearance to Common Vetch – Vicia sativa, but Bush Vetch is usually hairless.  Flowering from May to August, it is pollinated by insects, resulting in black pods or legumes 30–40mm (12–16in) long, 6–8mm (0.23–0.3in) wide which ripen during July and August containing numerous black seeds, however it spreads better vegetatively rather than by seed and can develop many branched subterraneous runners that are up to 6m (20ft) long and up to 1m (3.3ft) deep.  It is good forage crop of high nutritional value, and can be used for silage.  Whilst Bush Vetch attracts various Bee species, some beetles and caterpillars also feed on the plant.

FBCP do not advise or recommend that Bush Vetch – Vicia sepium is eaten or used as an herbal remedy.   Bush Vetch is not edible.    Despite being a member of the pea family, the seeds of Tufted Vetch not edible and should not be tasted because they are mildly poisonous.