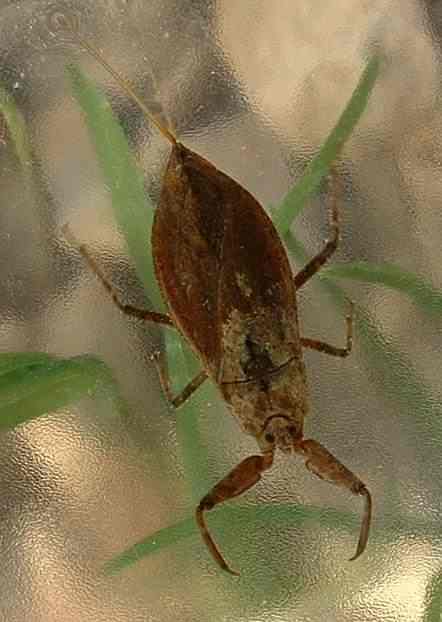 Photo ©2005 Jeffdelonge
Click any photo for a larger image 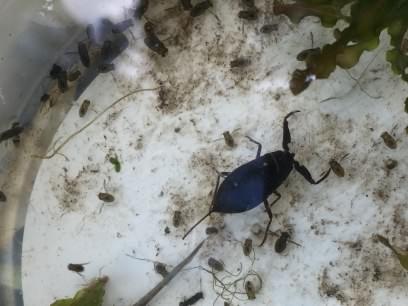 Another naming ambiguity as this insect is not actually a Scorpion, but an underwater predator primarily of aquatic invertebrates such as mosquito larvae, other insects, but occasionally also taking tadpoles and small fish.  Found world–wide and widely distributed in Britain, but commoner in the south, they grow to around 1.5–4.5cm (0.6–1.8in) long with a flat and broad body that is dark brown in colour; it hides in amongst the rotting leaf litter and uses it's front pincer–like legs to catch its prey.

With its long thin tail which is used as a snorkel so it can breathe under water, and pincer like front legs, it superficially resembles a land based Scorpion hence the name, but it is a common aquatic insect of shallow areas of urban ponds, canals, still or slow flowing water bodies and lakes.  A poor swimmer they typically crawl about on aquatic vegetation, however they can fly short distances to form new colonies.  Water Scorpions overwinter as adults, mating the following spring during April and May.  Like Grasshoppers, males Water Scorpions can stridulate making a chirping sound which attracts the female.  Once mated the female lays around thirty eggs on water plants or algae hatching after about four weeks as nymphs.  The developments phase known as incomplete metamorphosis takes five stages taking around eight weeks to become adults.