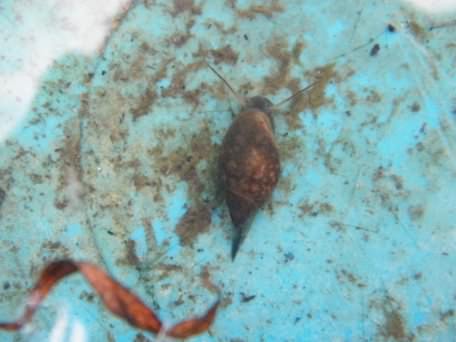 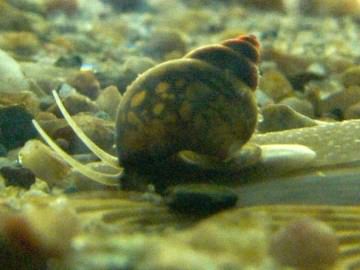 A small fresh water dioecious snail common in the UK but rarer in Scotland, central areas of Europe, but an introduced alien to North America found in stationary and slow flowing waters, shallow weedy ponds and lakes, and canals.  Grows to around 15mm long, conical with up to five whorls of an overall brown colouration with lighter speckles.  In a similar manner to its land dwelling cousins it has long tentacles which it uses for exploring its area, but unlike land snails their rudimentary eyes are at the tentacles base rather than on the ends.

It is an algae and detritus feeder, but can also use its gills to filter phytoplankton.  Predated by diving duck species and leeches.  It is a common species in the UK in suitable habitats, but suffering some decline eastern European areas.  Bithynia tentaculata is the type species of the genus.  It has a circular operculum or lid which can seal off the entrance to the shell giving protection.

Small clumps of eggs of around 50–100 are laid in double rows on aquatic plants during May to July when the water temperature is favourable, hatching time again depends on the water temperature and may take several months, gaining adulthood in the second year for a life span of two or three years.  There may be a second egg laying season in October and November from earlier born females.