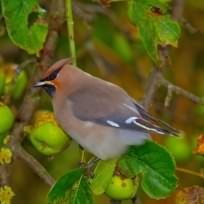 Waxwings are characterised by soft silky plumage, with unique red "waxy" tips to the secondaries where the shafts extend beyond the barbs.  Likened to sealing wax give the bird its common name.  The male and female have the same plumage.  Waxwings are arboreal natives of Northern Europe where they breed in the summer and feed on insects, they do not breed in Britain.  A cup–shaped nest is built by both sexes from twigs, grass and moss in pine trees or scrub.  Waxwings lay 4–6 smooth, glossy pale blue eggs are speckled with black and grey, approx 24mm by 17mm in size, incubated for 12–14 days and fledging in 15–18 days.  Calls are high–pitched, buzzing or trilling "sirrrr".  The Waxing is not a species of conservation concern.  A distinctive, colourful and approachable bird, they are about the size of a Starling and can be mistaken as such on a quick glance as in flight they look very similar with their short, triangular wings.

They occasionally migrate to Britain in the winter and their "irruptions" (sudden invasions of large numbers) occur when their usual fruit based food sources fail.  Birds can arrive between October to March and often stay until April or May.  Often seen around car parks and similar areas where Rowan or Hawthorn bushes have been planted in numbers, with sometimes large flocks of 50 or more through to many hundreds of birds.  They are an overall Grey colour with a Pinkish tinge becoming more Red towards the head which has a distinctive Red to Grey crest.  Black wings with white barring and yellow tips.  The tail graduates from the Grey through Black to a distinctive yellow border, is Red underneath.