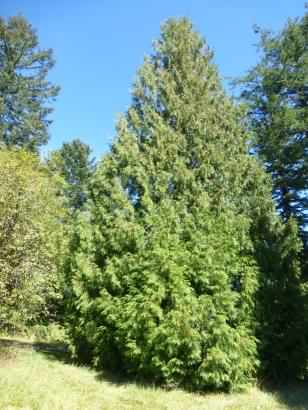 Western Red Cedar is native to western North America and an introduced species to many temperate parts of the world as a specimen or ornamental tree, and heavily trimmed as a hedging plant.  Although called Cedar it is not of the Cedrus genus but a member of the Cypress family Cupressaceae.  The tree is shade–tolerant and able to reproduce in dense shade, it is naturalised species in the UK  It is capable of living to a great age with the oldest being verified at over 1400 years old.  Capable of growing to 60–70m (197–230ft) on a large trunk with chocolate brown fibrous bark it has the capability to become a massive tree.

Scaly leaves 1–4mm (0.04–0.16in) long (up to 12mm (0.47in) on lead shoots) and 1–2mm (0.04–0.08in) wide in flat sprays of opposite pairs, with successive pairs at right angles.  The sprays are a shiny dark green above and banded mottled green below.  Strongly aromatic when crushed containing a natural preservative that prevents fungal growth.  Slender brown oval cones 10–18mm (0.4–0.7in) long, of 8–12 overlapping scales, are initially green ripening to brown and opening out in the autumn to shed the seeds.  The species name plicata is derived from Latin to mean "braided" referring to the pattern of its small leaves.  The species is monoecious, male flowering cones are small and inconspicuous whilst the female flowering cones are small, reddish purple, and borne near the tips of branches.  Several cultivars have gained the Royal Horticultural Society's Award of Garden Merit