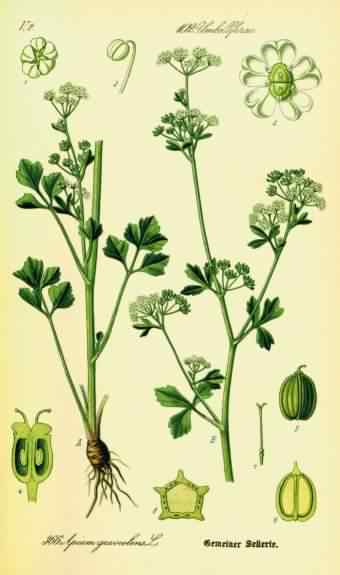 A biennial herb growing to 1m (3ft), smelling strongly of celery when crushed from the release of volatile oils found in all parts of the plant but especially the seeds.  Found over most of the UK but rare or absent in Scotland, very common in Southern England.  Leaves are shiny, 1–2 times pinnate.  Compound umbels 40–60mm (1.5–2.4in) across of small greenish white flowers appearing June to August, are formed of 4–12 simple umbels.  Probably of Mediterranean origin, wild relatives of celery are also to be found in southern Sweden, Egypt, Algeria, India, China, New Zealand, California and southernmost South America, although probably as an introduction in a lot of these areas.  Latin name derivation - Apium from the German "Eppich", graveolens from the latin "Gravis" meaning grave or heavy and "Olens" from the verb olere for smelling.  Celery is one of the oldest vegetables ever used in recorded history, woven garlands of wild celery are reported to have been found in early Egyptian tombs and ancient Greeks regularly crowned their winning athletes with crowns of celery stems and leaves.

Two main types of celery are used for culinary purposes, green or Pascal celery and white self blanching.  Most cultivated varieties emphasise the size of the ribbed stem, with all varieties having medicinal properties.  The most commonly available variety is the light–green to medium green Pascal celery, stalks are firm and solid with green leaves usually having a glossy surface.  The familiar Celery found in supermarkets and green grocers is A. graveolens var. dulce, with thick closely overlapping, ribbed petioles.  Celeriac – A. graveolens var. rapaceium has a large swollen taproot and is a specialty vegetable in the United States and a staple in Europe.  Celery is derived from a domesticated variety of a wild plant known as "Smallage" which was grown by the Greeks and Romans for medicinal qualities, it was associated with funerals and bad luck.  An essential oil distilled from Celery seeds is used as a food flavoring.  People with active kidney inflammation should avoid Celery and although uncommon, allergic reactions (even anaphylaxis) to celery seed could develop in people who handle or ingest celery.  Active compounds in celery stems and seeds can cause the skin to become highly sensitive to UV rays (photo dermatitis).  Celery seeds should not be taken from a seed packet intended for cultivation as most seeds sold for these purposes have been treated with chemicals and should not be eaten.

FBCP do not advise or recommend that Wild Celery – Apium graveolens is eaten or used as an herbal remedy. The leaves of Wild Celery are said to be edible either raw or cooked, having a strong flavour, however they are toxic if consumed in large amounts.