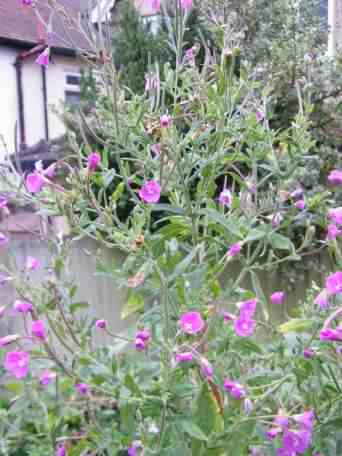 Height up to 2m (6ft).  Erect imposing perennial growing a thick rootstock, having alternate lance–shaped leaves.  Found in damp habitats such as fens and riverbanks.  Widespread and common throughout the country except in the furthest North.  Unstalked hairy leaves on hairy stems, topped by 4–petaled pinkish purple flowers 25mm (1in) across with pale centres and eight upright stamens, appear July – August, forming a long flower spike at the ends of stalks.  The flowers are self pollinating if this is not accomplished by visiting insects.  The seeds which are contained in capsules that split lengthwise, have a tuft of silky hairs and are dispersed by the slightest wind.  The plant also spreads by a creeping system of stems making it difficult to contain or eradicate.  The genus name Epilobium is from two Greek words epi (upon) and lobos (a pod), from the fact that the flowers stand upon the top of long, thin, pod–like seeds, with the appearance of thick flower–stems.  The name Willowherb refers to the willow–like form of the leaves.  Latterly classified by some modern botanists into a separate genus Chamcenerion hirsutum.

A native American species, imported to the European continent (unknown date but given in a few sources as mid 1700's to 1800's), as a cultivated decorative garden flower which has escaped and naturalised.  Commonly found in open disturbed areas, especially after fires (deriving the name "Fireweed"), or on building sites over most of the USA and most countries of Europe.  It has been used as a cooked vegetable, tobacco and tea substitute, and as a poultice.  Stem fibres were used for thread.  It has been shown to have anti–inflammatory effects, and is used in some cosmetic and mouthwash products, and the nectar is also used for honey.  Called "Blooming Sally" in Ireland, Sally being a corruption of the Latin Salix for Willow, a reference to the willow–like leaves.

FBCP do not advise or recommend that Great Willowherb – Epilobium hirsutum is eaten or used as an herbal remedy.   Apparently in Russia it is made into a tea, under the name of Kaporie Tea, although an infusion of the plant is said to produce a stupefying effect.  Young shoots are boiled and eaten like asparagus.  In the Russian province of Kamchatka the plant's pith is dried, boiled, made into ale and vinegar.  The ale is made more intoxicating with a toadstool, the Fly Agaric – Agaricus muscarius, a very dangerous pastime!  As fodder, goats are said to be extremely fond of it, also cows and sheep.