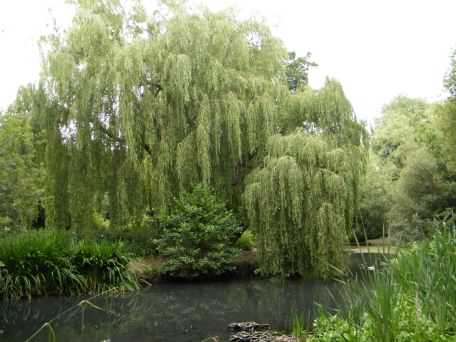 Weeping Willow is a deciduous tree native to Northern China but now found as an ornamental in many other countries including Europe and the southeastern United States.  One of a family of around 400 trees and shrubs, it grows to a height of about 20–25m (66–82ft) preferring damp places.  It can be a popular ornamental tree often grown by water and in other damp places, parks and gardens.  It has long thin trailing branches of yellow twigs and lanceolate leaves, bright green on top, green–blue below.  Male catkins (flowers) are found on differing trees to the female when the leaves appear in April to May, the catkins grow to 8cm (3.2in).  Willow bark has been used for tanning and is also rich in the alkaloid Salicin, which has tonic and astringent properties, often used instead of Quinine, although not as powerful.  Willow has an historical association with sadness.