Councillors Award .....
We were surprised to say the least at the Rushmoor in Bloom presentations recently to be presented with the Councillors Award for our efforts over the last year in maintaining the park, removing the terrapins, and for this web site.  We had no idea about the award, but were very pleased to receive it, its nice to see that our efforts and that of many others who contribute their time to the Park are appreciated.

Fish movements .....
In the last news we mentioned the visit by the Environment Agency in to take samples of the fish in the pond prior to moving a batch to Aldershot Park for Aldershot Angling Society.  This was to replenish some of the stocks lost when their pond was decimated in the recent "improvements", and to relieve us of some heavy overstocking, particularly Carp and Rudd.  This work was done on the 25th November when 15 people from Aldershot Angling, ourselves and Martin Moore of Moore and Moore Carp arrived in the park to do the move.  Dave Philips who had done most of the arrangements was getting a bit worried during the morning as the fish were right down at the bottom of the pond and it took some time for the electro-fishing gear to get them up to the surface.  Quite a bit if leg pulling was directed at Dave until things got going.  In the end about 300lbs of Carp, Rudd, Perch and one lone stickleback were successfully moved during the morning.

Newts .....
In the next year we will be closely monitoring the newts, dragonfly and other invertebrate life to see how they get on now that some of the predation by fish and terrapins has been reduced and to this end will put in place several tasks to improve their habitat, the main one will be a fine net to keep the fish from the newt breeding areas.

Tree planting .....
On the same day as the fish movements we also had our tree panting to mark the Millennium, National Tree Week and the parks 15th year.  The Mayor of Rushmoor, Councilor Jim White and his wife attended to perform the ceremony.  Crowds were not large but that is not surprising with the weather on the day, same as the last few months it rained all day! except when the Mayor was at the park. 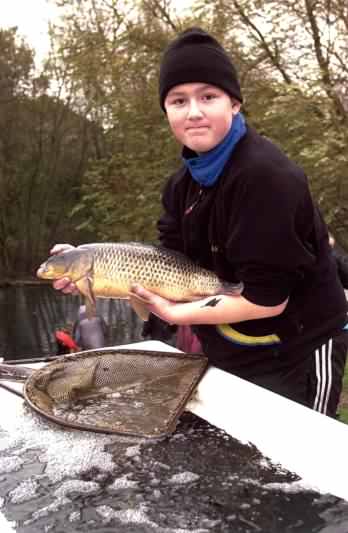 There was some fishy business going on down at Brickfields Country Park in Aldershot on Saturday when more than 1500 Carp, Perch, Tench and Rudd were transferred from the pond to a new home in Aldershot Park.

Brickfields Friends chairman, Mike Hatch, said the aim was to reduce fish numbers in the overcrowded pond while at the same time helping Aldershot Angling Club to replenish fish stocks heavily depleted by a controversial pond cleaning and draining scheme at Aldershot Park.

The fish move was a combined operation by The Friends, the angling club, Rushmoor Borough Council and the Environment Agency while Mike Hatch and Dave Philips of Aldershot Disabled Angling Association coordinated it.

Brickfields has recently had an £8000 major pond cleaning and refurbishment program.  On Saturday morning Rushmoor Mayor Coun.  Jim White performed a tree planting there.
Brickfields is the site from which clay was extracted for new buildings erected as the town expanded with the arrival of the Army.  It was turned into a park in the early Eighties.  Recently The Friends were commended by Rushmoor for their efforts in clearing the pond of terrapins, dumped by people who did not want them.

This item is a reprint (with permission) of an article that appeared in the Star. (Article ©2000, John Walton, Picture ©2000 Les Millar)