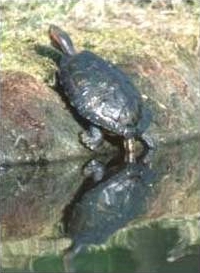 Medium sized aquatic animal similar in appearance and colouration to a tortoise, ranging from 2cm (0.8in) when born to 40cm as adult, recognised by a red stripe down each side of the head.  Almost totally aquatic, only leaving the water to bask on hot sunny days, they hibernate over the winter at the bottom of ponds or shallow lakes where they enter a state of torpor.  Feeding on vegetation, insects and small fish, they are reasonably widespread, being more active during hot weather.  They will tolerate other species in their habitat, but will quickly dive underwater when approached making them difficult to catch.

Red Eared Terrapins are not a native species to the British Isles, but have become common in most areas due to widespread release of imported pets, now banned, by the public once it is realised that terrapins in captivity need a lot of care, as they can live to over 40 years.  They have a strong bite resulting in injuries that should be seen by medical staff as soon as possible as they may carry some diseases.  They are not thought to be breeding in the UK as the mean summer temperature is too low, however there is some possibility that if temperatures rise by a few degrees breeding could start.  Red eared Terrapins are members of the genus Chelonia referring to reptiles with a shell, with nearly 250 species in the genus.  In the United States this genus are usually referred to as turtles, however they are generally split into three groups; Turtles (aquatic), Tortoises (land) and Terrapins (semi aquatic).

Some press reports of Terrapins have incorrectly described them as "snapping turtles" (see the bottom right photo).  They are a species that look like rotund miniature Alligators as some have a knobbly shell.  Found in the swamps of Louisiana in America, there are some in the UK from the imported pet trade.  They have a powerful bite being able to inflict serious injury, larger adults being able to crush bone.  It is thought that snapping turtles can live to over 100 years.  A very large Alligator Snapping Turtle was recently removed from the pond in Manor Park Aldershot, Hampshire, when the pond was re–conditioned, it had been resident there for many years.

There is a European turtle species The European Pond Turtle – Emys orbicularis, similar in shape, size and habit to the Red Eared Terrapin, but with a more rounded head and yellow speckled skin.  This species is not found in the UK, but is common in their native ranges of central and southern Europe, they are listed as Near Threatened on the IUCN Red List due to various environmental threats.

2013 Update - we have had a report from a reptile specialist near Southampton, that terrapin nests and eggs were found locally but no hatchlings were found.  Further news in the press is reporting that - "baby" - terrapins have been seen in Regents Canal, behind London Zoo.  At this time it is not known if these animals have an "egg tooth" as this would point to them being recent hatchlings and so probably breeding in the area.